5p bag charge cuts use by 80% in Northern Ireland

A new five pence charge on carrier bags in Northern Ireland brought in at the end of spring may have cut their use as much as 80%. The impressive reduction […] 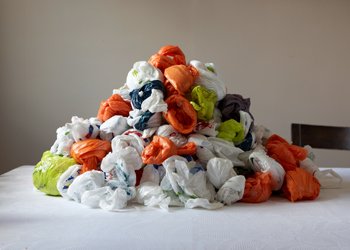 A new five pence charge on carrier bags in Northern Ireland brought in at the end of spring may have cut their use as much as 80%.

The impressive reduction was revealed by official statistics released by the Department of the Environment (DOE) this week.

The Provisional Carrier Bag Levy figures show 17.5 million single use carrier bags were dispensed there between 8th April – when the levy came into effect – and the end of June.

There aren’t precise pre-levy figures to compare this with but around 300 million bags were used annually in Northern Ireland last year so the DOE estimates there has been roughly an 80% reduction.

The department is reluctant to make predictions for the rest of the year because of factors such as seasonal variation.

Environment Minister Mark H Durkan welcomed the figures wholeheartedly:  “This is great news for the environment. Our streets and hedgerows, our fields and parks should no longer be places strewn with discarded bags.”

The DOE collects the proceeds of the levy online, which is where the latest figures come from. Mr Durkan added:  “Retailers have played a big part in introducing the legislation as smoothly as possible. I congratulate them on that. I urge any business dispensing new single use bags, that hasn’t already done so, to register now.”

You can register at https://www.nidirect.gov.uk/baglevy.