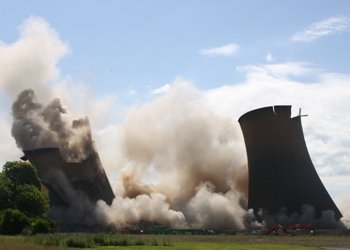 Neil Riley, Head of Generation Development for E.ON UK, which owns the site said the towers were removed to prevent them from being dangerous.

He said: “I know the announcement of the final demolition timetable will be met with sadness by the many people who worked at the power station but it is essential that we remove the remaining towers as they are in danger of becoming unsafe and they cannot be used again as part of any new development.

Mr Riley said there are no current plans for development on the site but it represents an excellent opportunity for future generations.