The Scottish Government has launched a £103 million fund which will target private investments towards renewable energy. Speaking at the Scottish Low Carbon Investment conference, First Minister Alex Salmond said the […] 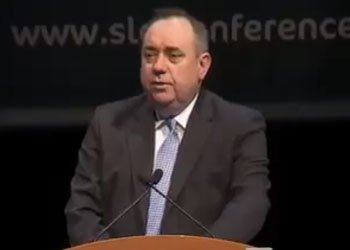 The Scottish Government has launched a £103 million fund which will target private investments towards renewable energy.

The GIB will provide financial help to increase private sector investment for green businesses when it opens next year.

The REIF is aimed to help develop renewable technologies which are advanced but have a significant funding gap such as marine energy and renewable heat.

He said: “The planned advisory group will provide expert advice for people who have good ideas and projects to put to the Green Investment Bank but who need a helping hand to make them ready for investment. The group will help those people to refine and pitch their proposals – by doing so, it should enable the Green Investment Bank to make decisions quickly and to start investing in projects which will deliver real benefits.”

Niall Stuart, Chief Executive at Scottish Renewables welcomed the news and said the fund could be a “vital catalyst” to attract more private investment.

He said: “This £103 million fund will inject much-needed investment into the development of the next generation of renewable technologies, such as marine energy and renewable heat. This kind of support can be a vital catalyst in attracting even greater levels of private investment.

“Increasing use of renewable heat could make a significant reduction in carbon emissions and in tackling fuel poverty, given that around half of all energy used in Scotland is heat homes, businesses or industrial processes.”

The fund will be provided by the Scottish Investment Bank, with the first deal expected to be completed by the end of the year.