The only plant for assembling and disassembling nuclear weapons in the US has become a construction site for what could be home to the “largest” federally-owned wind farm. The wind […] 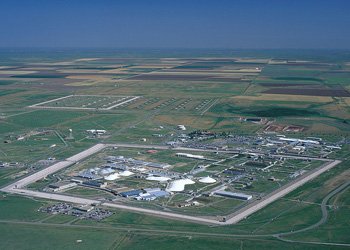 The only plant for assembling and disassembling nuclear weapons in the US has become a construction site for what could be home to the “largest” federally-owned wind farm.

The wind project at the Pantex Plant (pictured) in Amarillo, Texas will have a total capacity of 11.5MW, generating around 47 million kWh of electricity every year – more than 60% of the annual energy needs of the plant.

The Pantex Renewable Energy Project (PREP) will also reduce carbon emissions by more than 35,000 metric tons per year – equivalent to removing 7,200 cars from the road every year or planting 850,000 trees.

PREP is expected to generate an average of $2.8 million (£1.81m) every year in energy savings which will be used to fund its cost through an 18-year performance contract with Siemens, which is constructing the plant.

The project will help the Pantex achieve President Barack Obama’s Administration goal for the federal government to generate 20% of its electricity from renewable sources by 2020.

Daniel Poneman, Deputy Secretary of Energy said: “As the largest energy user in the country, the federal government has a tremendous opportunity to lead by example in taking actions to improve energy efficiency and increase renewable energy usage to save taxpayers’ dollars and reduce greenhouse gas emissions.

“Responsible development of America’s wind energy resources is a critical part of our all-of-the-above energy strategy and the Pantex wind project furthers our commitment to lead by example and to advance a cleaner, more sustainable energy future.”

Construction of the wind farm is expected to be completed next July.

ELN recently reported that wind power became the number one source of new electricity generation capacity for the first time in the US last year.