Britain should import less coal and make better use of our “national treasure” according to Kevin McCullough (pictured, right), Chief Executive of UK Coal. Mr McCullough said: “We rely on […] 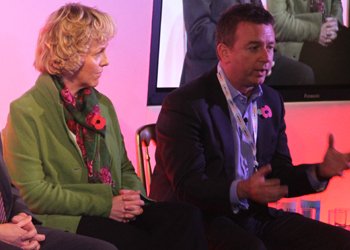 Britain should import less coal and make better use of our “national treasure” according to Kevin McCullough (pictured, right), Chief Executive of UK Coal.

Mr McCullough said: “We rely on 40% of electricity generated from coal today yet indigenous supplies of coal amount to about 5% or 6%. We import a hell of a lot of coal.”

Speaking on the Building More panel at Energy Live 2013 last week he said: “Whilst we are investing in some clean technology for our current fleet in the UK, our near neighbours in Europe are actually building brand new state of the art coal plants today.”

The UK Coal boss said the new plants had a thermal efficiency of around 50%, which was “much, much higher” than the plants Britain is still using.

While he believed in decarbonisation, Mr McCullough claimed “the pace at which we are trying to race ahead of our EU and local colleagues is frankly ridiculous. It’s putting us in a perilous situation.”

Sara Vaughan (pictured, left), Director of Strategy and Regulation for E.ON said the firm was spending hundreds of millions of pounds on its Ratcliffe coal-fired station “to make it cleaner in terms of sulphur and nitrous oxide.”

She said: “We absolutely believe coal is part of the future.”

According to Mrs Vaughan coal use is being held back by environmental policy: “The real problem we have with coal in the UK at the moment is something called the Carbon Price Floor.”

She said the carbon tax was “exporting emisions”.