Triad Season – Are you ready?

With the triad season starting in November and ending in February, is your business prepared for the changes ahead? Triads are the method used to set the price of Transmission […] 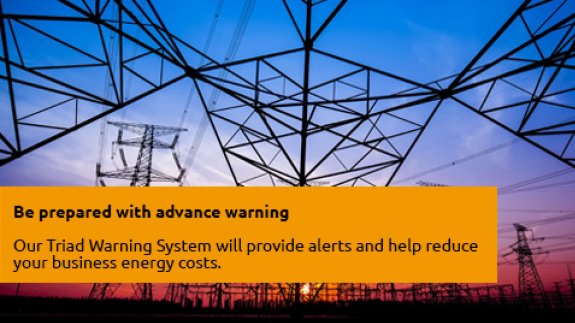 With the triad season starting in November and ending in February, is your business prepared for the changes ahead?

Triads are the method used to set the price of Transmission Network Use of System (TNUoS) charges for non-domestic consumers with half-hourly meters. This charge is based on consumption for the three half-hourly settlement periods with the highest system demand. These are typically during cold weather and at around 5pm-6.30pm, when industrial demand coincides with the domestic tea-time period. They can occur in any half-hour on any day between November and February inclusive but are separated from each other by at least 10 full days.

The Triads are determined after the event using Elexon settlement metering data. These are usually made available in March, following which National Grid confirms the Triad half-hours. Once confirmed they are not updated for subsequent settlement data.  s a result, most businesses try and predict these periods in order to reduce their energy consumption during these times. By doing this, larger business users have an opportunity to reduce their electricity bills, by switching off or lowering their usage at a time which coincides with one of the Triad periods.

Triad periods can be very unpredictable and depend upon several influencing factors – including the ambient air temperature and wind speeds.

By utilising the latest available settlement data from March 2017 businesses can get ready for the forthcoming Triad season and potentially be saved from excessive energy bills. STC Energy offer a Triad Alerts service for predicted Triad periods to ensure you are ready. Prior warning can help reduce TNUoS charges – which often run to tens of thousands of pounds – by reducing consumption when you know a Triad is going to occur.

It is important to remember that Triads also coincide with periods of other peak charges such as DUoS and Capacity Market charges. This means that reductions in electricity costs can also be achieved even when a Triad is not called on a specific day.

Minimising consumption can be achieved by simply turning off lights when not in use or altering production times. More and more businesses are switching off loads or starting stand-by generators during Triad warnings in an attempt to reduce the TNUoS charges.

STC Energy is part of the Inspired Energy Group.