A group of primary pupils from Wetherby, known as the Energy Heroes who help reduce emissions at their school, were invited to launch the coalition 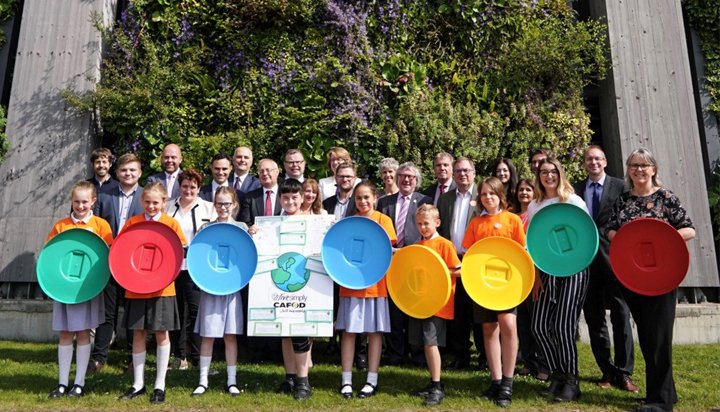 A new Climate Coalition has been launched in Leeds City Region to support its ambition of becoming a net zero carbon city region by 2038.

Civic leaders, businesses and schoolchildren have backed the creation of the Leeds City Region Climate Coalition, following research commissioned by the West Yorkshire Combined Authority to identify a science-based target for the City Region to become zero carbon.

The research found it needs to halve its emissions every five years to become net zero carbon by 2038, building on the City Region partners’ contribution to an overall 38% reduction in emissions since 2025, compared to 27% nationally.

It follows the declaration of a climate emergency by the Combined Authority last month.

Those signing up to the Climate Coalition have pledged to play their part in reaching the 2038 target, with significant progress by 2030.

A group of 10-year-old primary pupils from Wetherby, known as the Energy Heroes who help reduce emissions at their school, were invited to launch the coalition and be some of the first to pledge their support.

Eleanor, aged 10, said: “I have loved learning about how to live a better life. It’s all about respect for people and the planet – living in harmony for eternity.”

The news comes after the UK became the first major economy in the world to pass a law to bring greenhouse gas emissions to net zero by 2050. The Climate Change Committee, however, said the government’s actions to tackle climate change are falling well-short of what is needed to achieve the goal.

Cllr Susan Hinchcliffe, Chair of the West Yorkshire Combined Authority and Leader of Bradford Council added: “We’re creating our Climate Coalition to bring people from different parts of the City Region together as we fight for a cleaner, greener future where our children and their children can thrive… We will have made significant progress by 2030 and the City Region will be net carbon zero by 2038 at the latest.

“The Combined Authority has already developed an energy strategy and delivery plan and declared a climate emergency to reflect the seriousness of the problem we’re facing. We’ve already engaged with more than 150 individuals and organisations to be part of our collective effort to meet this challenge by working in partnership.

“Investment in clean growth could add £11 billion to our economy and create 100,00 extra skilled jobs for local people. People can also enjoy lower energy bills and better health for everyone in the region, thanks to warmer, more efficient homes, greener transport and cleaner air.”