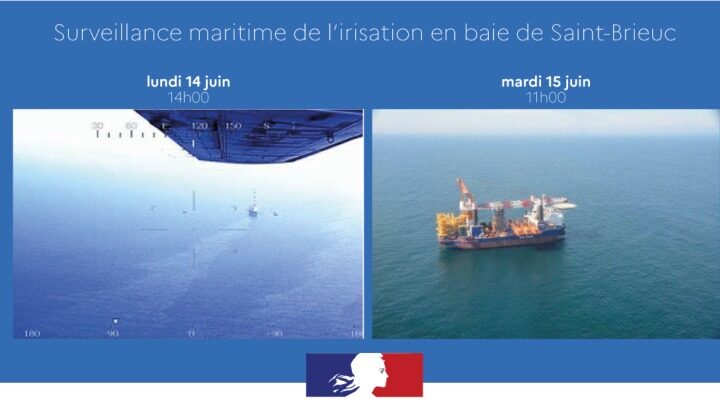 Construction work on the Saint-Brieuc wind farm in Brittany, France has been paused due to allegations of an oil leak from an offshore installation vessel.

The vessel has been carrying out drilling work for the €2.4 billion (£2.1bn) project.

“The pollution, first observed by the Cleanseanet satellite, then confirmed by a Customs plane.  Faced with this significant pollution, the Prefecture Maritime Atlantique quickly transmitted the elements observed to the public prosecutor of Brest, now in charge of the case.”

Ailes Marines, a company owned by the Spanish renewable energy firm Iberdrola, is in charge of the development, construction, installation and operation of the offshore wind farm.

In an announcement, the company said: “The AEOLUS jack-up vessel in charge of drilling and installing the foundation piles for the Saint-Brieuc offshore wind farm is currently immobilised in the area.

“This decision was taken following a technical problem encountered during the second series of drilling carried out. This technical issue resulted in the flow of Panolin HLP SYNTH hydraulic fluid used in the guide systems of the drill rings.”

Ailes Marines claimed that this fluid is biodegradable and is regarded in the industry as one of the most environmentally friendly hydraulic fluids.

It added that the fluid is widely used for underwater applications due to its low impact on the environment: “Ailes Marines takes all matters relating to the environment very seriously.

“In accordance with its procedures, work was immediately halted pending the technical inspection of the drilling template by the authorities.”

The company confirmed that once the inspection is completed, the vessel will return to its home port to carry out a complete technical check.

French Minister of the Ecological Transition Barbara Pompili said: “I expect the offshore wind industry to be a complete example in the deployment of crucial energy. In Saint-Brieuc, we make sure that Iberdrola takes all measures to clean up the pollution and ensure the continuation of the work in irreproachable conditions.

“I will not tolerate any negligence in the deployment of wind farms at sea. I immediately summon the managers of Iberdrola, builder of the Saint-Brieuc farm, to explain the situation.”

The wind farm, which is to be erected 16.3 kilometres off the coast of Brittany, will have a total capacity of 496MW.

Once operational in 2023, it is predicted to produce enough renewable energy to satisfy the needs of around 835,000 consumers.