Molluscs musselled out by the water companies

Water companies have started blasting infestations of mussels out of their pipes with a new weapon called a BioBullet. The molluscs cost the UK water companies millions every year as […] 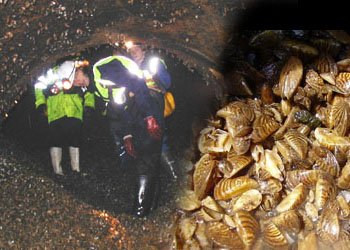 Water companies have started blasting infestations of mussels out of their pipes with a new weapon called a BioBullet. The molluscs cost the UK water companies millions every year as they clog up our pipes.

The Zebra mussels, which are thought to have come from as far away as Eastern Europe multiply out of control as they have no know predators in the UK to control their population. Adult females can release more than 30,000 eggs per year.

Build-ups of the mussels and the shells of dead ones block water companies’ pipes. Thames Water, spends £1m on clearing about 1,000 tonnes of zebra mussels from its water pipes and water treatment facilities.

But experts have developed an eco-friendly way to get rid of the troublesome mussels, in the form of fat-coated blobs called ‘BioBullets’ which poison them. Luckily for us, the chemical can not harm humans.

Dr Piers Clark, commercial director for Thames Water, said: “Zebra mussels were prevalent in the middle of the 20th century but have recently become a problem again with an influx in trade from Eastern Europe since the 1990s. We believe BioBullets will save hundreds of thousands of pounds in operational costs in a way that has no adverse impact on the environment.”

The trial at Kempton Park water treatment works in southwest London has £550,000 of backing from the Government’s Technology Strategy Board.

Estimates vary but it is thought that the zebra mussel nuisance costs US water and power industries up to $500m a year in clearing tunnels and pipelines.