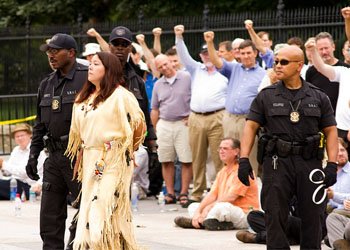 American Indian and Canadian Native leaders have been arrested outside the White House while protesting against a 1,700 mile pipeline from Canada to the Gulf Coast. Hundreds of protestors travelled to Washington DC to try to persuade President Barack Obama not to issue a permit for the new $13billion pipe planned by TransCanada because of […]