A huge blaze overwhelmed a recycling plant in Manchester last night and 50 firefighters are still present at the fire trying to dampen it. Working throughout the night crews manning […] 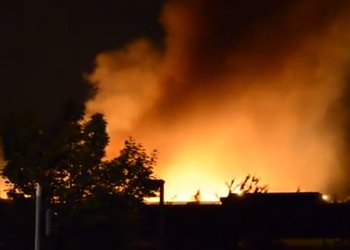 A huge blaze overwhelmed a recycling plant in Manchester last night and 50 firefighters are still present at the fire trying to dampen it.

Working throughout the night crews manning ten fire engines managed to contain the blaze but expect to remain there for at least another day. There are no reports of any injuries, according to the local council.

It seems a number of large bales containing recyclable materials were alight as well as a unit at the Bedford recycling site, one of three in the Stockport region.

Stockport Council said it has been informed by the Environment Agency that the site takes only non-hazardous waste which is a mixture of commercial and domestic waste.

In a statement it added: “Results from GM technical services shows the plume contains no toxic gases but smoke particulates common to all fires.”

Greater Manchester Fire and Rescue Service’s Area Manager Sean Booth said this morning: “We will certainly be here for longer than today. There is a large smoke plume going into the air and moving towards Tameside.”

Last year firefighters kept watch over a fire at a Dagenham recycling plant – which nearly scuppered the London Olympics’ Closing Ceremony – for three weeks while another at a recycling plant in Stanton-by-Dale, Derbyshire took six days to go out last September.

Fires at such plants appear to be increasingly common with waste sector insurers apparently alarmed by the rise of incidents, the trade magazine Materials Recycling World reported earlier this year.