An UK university has developed a device that could be used for cost effective gas sensors. Scientists from the University of Exeter’s technology emits light in the infrared part of […] 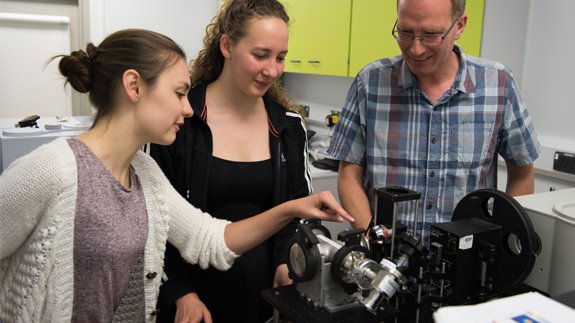 Professor Geoff Nash with part of the team. Image: University of Exeter

An UK university has developed a device that could be used for cost effective gas sensors.

Scientists from the University of Exeter’s technology emits light in the infrared part of the spectrum as gases strongly absorb infrared light.

This absorption can be used as a way to sensing them.

However, most existing infrared gas sensors use conventional “light-bulb” incandescent sources of infrared light, “which have a number of considerable shortcomings including limited lifetimes”.

The new sensors could be used for a diverse range of applications including the sensing of atmospheric pollutants such as Nitrogen Dioxide emitted from cars.

The Exeter team, which included some students, used different 2D materials, which are only a few atoms thick, to create a device that is similar to a nanoscale light bulb but where the filament is extremely hard to break.

They also believe these devices could be more cost effective and sustainable to manufacture than other technologies used for the same aim.

Professor Geoff Nash of Engineering Physics and Director of Natural Sciences said: “Previous devices we’ve made really only operated in vacuum and would break very quickly when exposed to air. By encapsulating the nanoscale filament in a protective coating, we have shown that these devices can operate in air for well over 1,000 hours, paving the way for the development of practical infrared sources that could be used in sensor applications.”