The government has proposed to reduce support for anaerobic digestion (AD) projects in the UK. It has launched a consultation – open until 7th July – on revised support levels […] 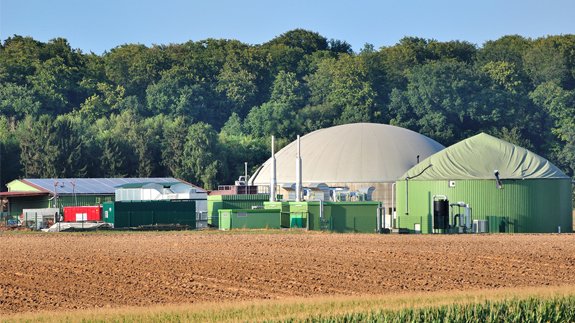 The government has proposed to reduce support for anaerobic digestion (AD) projects in the UK.

It has launched a consultation – open until 7th July – on revised support levels for AD and micro combined heat and power (mCHP) technologies currently eligible for the Feed-in Tariff (FiT) scheme.

The initiative was launched in 2010 to encourage deployment of small scale low carbon power generation in the country.

Anaerobic digestion is the process by which organic matter such as animal or food waste is broken down to produce biogas and biofertiliser.

Tariffs for installations between 250KW-500KW would also be cut from 7.58p/kWh to 5.52p/kWh while those larger than 5,000KW would receive no subsidies.

DECC states: “Our tariff-setting methodology considers AD installations claiming RHI [Renewable Heat Incentive] payments, relying on 100% food waste as their feedstock and receiving a gate fee of £20 per tonne. Analysis shows that such installations are able to make sufficient revenues to make the deployment of the plant viable and achieve a 9.1% rate of return without support from the generation tariff.”

It adds it had projected 100 installations equating to 160MW of capacity by 2020/21 when the FiT scheme was launched.

However by the end of March this year, the number of installations accredited under the FiT scheme was 250, with an installed capacity of 177MW. 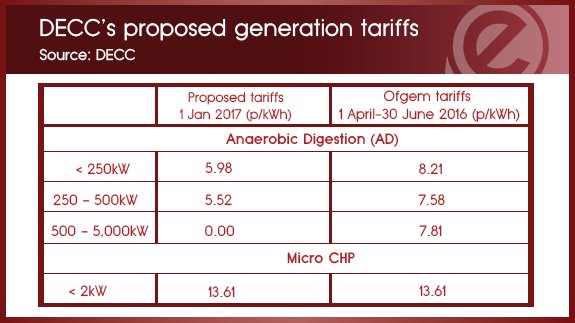 In contrast, mCHP plants “have not seen a sustained level of deployment”.

Therefore DECC is proposing to maintain the current tariff for projects under 2KW at 13.61p/kWh.

The technology was originally included in the FiT scheme as a pilot. The government claims support has been available for up to 30,000 installations, with an capacity of 2KW or less.

However despite an increase in generation tariffs following the 2011/12 FiT review, deployment of mCHP has remained low with only 501 installations supported under the scheme by the end of 2015, with a further 158 commissioned and awaiting accreditation.

Annual deployment rates have continued to fall since 2011 with only 18 installations deployed in 2015, DECC adds.

The Anaerobic Digestion and Bioresources Association (ADBA) said the consultation “does nothing to address DECC’s fundamental lack of ambition for AD and community scale renewables”.:

CEO Charlotte Morton added: “It proposes restrictions to plant sizes and feedstocks that will make it even harder to deploy viable AD plants using waste, crops or agricultural residues. Removing support for new plants above 500KW is completely unjustified and will kill off projects which could otherwise have delivered DECC’s objectives while representing good value for money.

“The government needs baseload electricity to ensure energy security and technologies that reduce emissions from agriculture and waste to meet our carbon budgets. AD can deliver all of that, at scale, now – but only with the right support.”