The final deal for the construction of Hinkley Point C has been signed today. The UK Government, EDF and CGN have signed the contract in a ceremony in London following […] 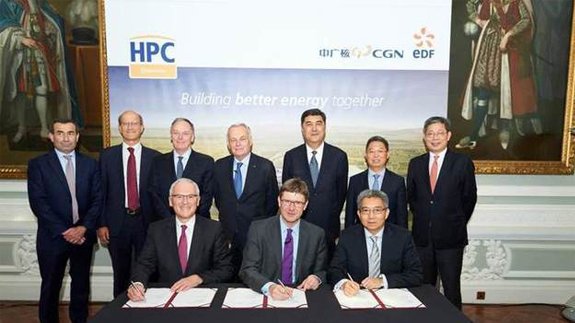 Chairman and CEO of EDF Jean-Bernard Levy, Business, Industrial and Energy Secretary Greg Clark and Chairman of CGN He Yu during the signal ceremony. Image: BEIS

The final deal for the construction of Hinkley Point C has been signed today.

The UK Government, EDF and CGN have signed the contract in a ceremony in London following Theresa May’s decision to green light the £18 billion nuclear project after she reviewed it.

According to Business, Industrial and Energy Secretary Greg Clark, the first nuclear project to be built in the UK in a generation “marks a significant step forward for a new era of nuclear power” in the country.

He added: “Britain needs to upgrade its supplies of energy and we have always been clear that nuclear power stations like Hinkley play an important part in ensuring our future low carbon energy security.”

Hinkley Point C is expected to provide 7% of the UK’s electricity needs for 60 years and create 26,000 jobs.

However the project has been criticised for the price the government has to pay to EDF which is set at £92.50MW/h.

EDF Group Chairman Jean-Bernard Levy said: “The project is of strategic importance for EDF Group and the nuclear industry. All of the employees of EDF Group around the world can be proud of the progress we have made. Now the next phase is underway. EDF, its partners and suppliers are ready and dedicated to the successful construction of Hinkley Point C.”

Chinese firm CGN, which is investing £6 billion in the project, has also signed agreements with the government relating to the construction of Sizewell C and Bradwell B.

CGN Chairman He Yu added: “The signing of these agreements signifies CGN’s commitment to the UK as one of the world’s leading developers and operators of nuclear power.

“This flagship programme is a triple win for China, Britain and France and is a culmination of years of co-operation between the three countries. CGN looks forward to providing UK consumers with safe, reliable and sustainable energy and maximising opportunities for UK suppliers and the UK workforce.”