One of the world’s largest plants for generating energy from landfill biogas has opened in Brazil – and is made in Italy. To transform urban waste from cities into energy […] 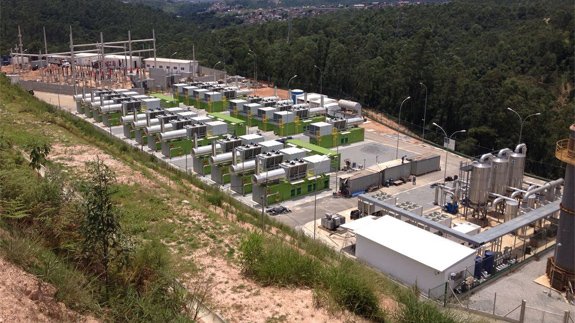 One of the world’s largest plants for generating energy from landfill biogas has opened in Brazil – and is made in Italy.

To transform urban waste from cities into energy using landfill biogas in latest-generation plants: this is the ambitious project recently completed in Brazil by Gruppo AB, of Orzinuovi (Bs), world leader in the cogeneration sector. The Italian company and Solvi of Brazil, a leader in ecological waste management, have conceived and implemented this important development programme for the landfill sector with the construction of two cogeneration sites fed by landfill biogas: at Caieiras in the São Paulo region, and Minas do Leão in the Rio Grande do Sul region.

Caieiras, which opened a few weeks ago, is one of the largest landfill biogas-fed power generation sites in the world. The landfill site receives 10,000-12,000 tons of waste per day, serving a population of 13 million people. The biogas treatment system comprises three lines of 7,500 cubic meters each, with biogas dehumidification at five degrees and the treatment of siloxanes with activated carbon. Twenty-one Ecomax® 14 Landfill Gas systems, each of 1,407 kWe, operate simultaneously in the cogeneration centre for a total capacity of 29,547 kWe.

The electricity produced is supplied to the mains grid at high voltage. This plant enables a saving of about 300,000 tons of carbon dioxide a year that would otherwise enter the atmosphere, a fact that led the city of San Paolo to choose this project to represent the Region at last year’s COP21 conference in Paris. It is worth underlining that, for this site, the number of cogeneration modules is planned to increase to a maximum of 36 in the future.

The landfill site at Minas do Leão and its related biogas processing technologies, inaugurated last year, mainly exploit urban waste from the city of Porto Alegre at quantities of over 3,500 tons per day. When at full capacity the site generates 8.5mw of electricity, supplying the energy needs of over 200,000 people.

At the heart of the plant are six Ecomax® 14 Landfill Gas systems, each of 1,426 kWe, for a total capacity of 8,556 kWe. In this important project too, the Ecomax® distributed generation solution in a modular package has confirmed the characteristics and advantages that make it one of the world’s unique engineering products, entirely conceived and developed in Italy by AB.

Angelo Baronchelli, President of AB said; “I’m particularly proud of the huge value that these plants bring to Brazil, its environment and its people. I’m also proud to have been able to share with this great country and the world all our experience and Italian know-how in the energy efficiency sector, which is so important to the economic development and sustainable future of our planet.”

Massimo Cavalli, director of the Brazilian subsidiaryadded;”AB’s structure in Brazil is made up of 40 units – including technical, PM and administrative divisions – engaged in the operation and maintenance of about 55 electricity generation plants fed with landfill biogas, with an hourly production of about 50MW that equates to approximately 1,680,000 tons of CO2.”