Activists have been protesting since 4.30am this morning to stop the controversial work at Preston New Road 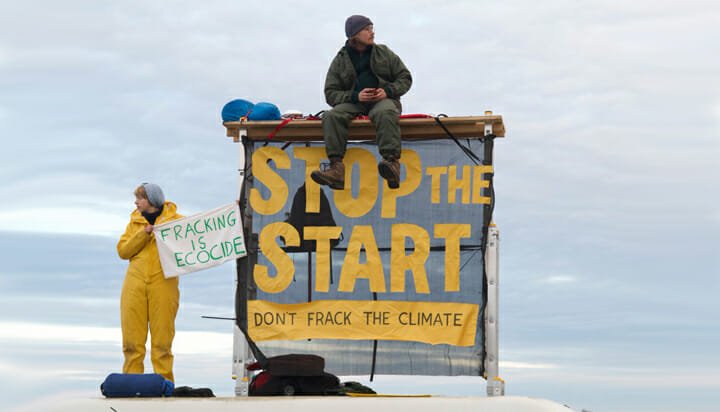 Two of the activists with a banner on a van. Image: Reclaim the Power

Two of the activists who were part of an anti-fracking protest in Lancashire today have been arrested.

A spokesperson from Lancashire Police told ELN a man, aged 45 and a woman, aged 34, have been taken into custody “on suspicion of wilful obstruction of a highway”.

They are part of a group of around 50 protesters from Reclaim the Power blocking the Preston New Road site using a van since 4.30am this morning – a scaffold structure was erected on top with a banner reading ‘Stop the Start. Don’t Frack the Climate’.

The group said the protest is to prevent the start of fracking by Cuadrilla – for the first time in seven years in the UK – and in response to the government’s Green GB Week, which kicked off today.

Police were forced to close off the site and two activists locked themselves to tyres in the middle of the road outside the site.

Charlie Edwards from the group said: “Today the government have launched their Green Great Britain Week – a tokenistic attempt to hide a series of climate wrecking decisions such as expanding Heathrow Airport and forcing fracking on local communities.

A spokesperson from Cuadrilla, however, told ELN the protest did not delay its operations at all and it was local road users who were affected.

A government spokesperson added: “Shale gas has the potential to be a new domestic energy source, enhancing our energy security and delivering economic benefits, including the creation of well paid, quality jobs. We have been clear that any shale developments must be safe and environmentally sound.”