The airport claims the 1.7MW facility will reduce its carbon emissions by around 220 tonnes every year 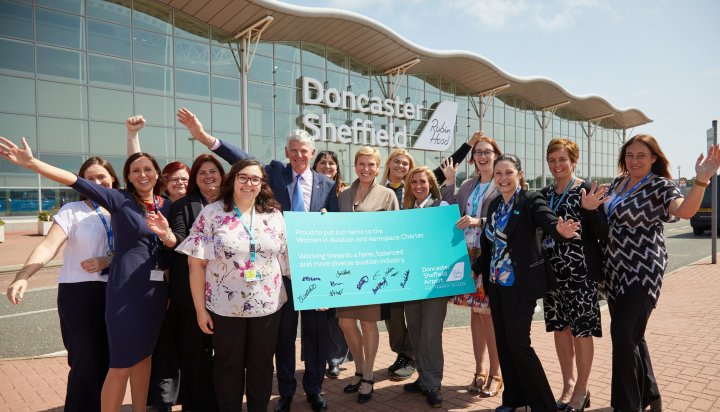 Doncaster Sheffield Airport has announced it is to install 1.7MW of onsite renewable capacity, in the form of a £2 million solar farm.

Aviation Minister Baroness Vere visited the airport to announce the move, which the airport says will “drastically reduce” its carbon footprint by enabling it to generate around a quarter of its own electricity cleanly.

The solar farm is due to be operational in 2020 and is expected to reduce the airport’s overall greenhouse gas emissions by around 220 tonnes every year – this is the equivalent of boiling approximately 2.2 million kettles.

Doncaster Sheffield Airport expects to see passenger numbers soar to 1.45 million this year, with this figure forecast to double again within the next five years.

Aviation minister Baroness Vere, who was also attending the airport to talk about the role of women in aviation, said: “To bring about real change in transport, we need to do things differently. From decreasing carbon emissions at airports to increasing female representation, the aviation industry is acting now to safeguard our future.

“Today’s investment shows that airports are finding practical ways to become cleaner and greener and Doncaster Sheffield’s commitment to the women in aviation charter is another vote of confidence in our work to build a fairer sector for all.”

Heathrow Airport recently has unveiled details of its preferred ‘masterplan’ to build a controversial third runway.