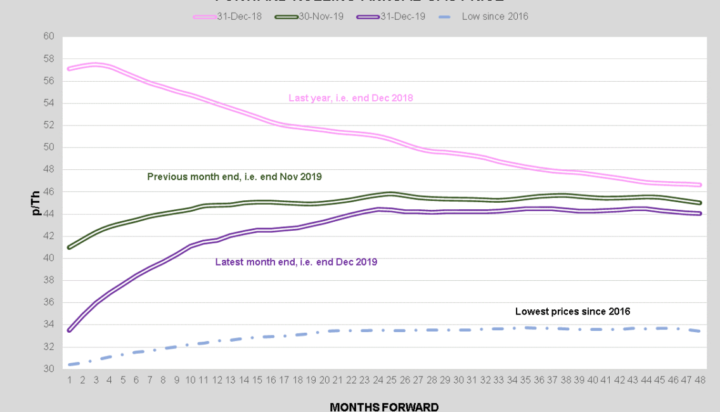 Like last month, UK’s energy prices dropped over the month, though they did spike up mid-month on concerns related to Ukraine/Gazprom negotiations. However, it later transpired that such concerns were unfounded as a new supply and transit agreement was signed; furthermore, at the end of December a lump sum payment by Gazprom, envisaged as part of the arrangements, was made without issue – this put additional downward pressure on the gas market, especially as it coincided with a period of low demand and mild weather conditions.

The rolling-annual forward curves for UK gas and power were now both clearly in contango at the end of the month; demonstrating the underlying weak sentiment.

European gas inventory levels did reduce a bit over Decemebr2019, as would be expected, though levels are still significantly higher than for recent years, showing continued good availability of gas.

The weather and temperatures were mixed over December 2019, with some cold and some mild periods, although it was reasonably wet for most of the month; whereas, there was some snow at higher ground, most of the precipitation was in the form of rain – the period around Christmas was generally dry. By the end of the month, nearby annual prices had dropped 10%, albeit there was a significant (Gazprom-Ukraine induced) spike just after mid-month. Bearing in mind, how consistent the down trend has been, this spike up may well have been enough to reduce the risk of the market being ‘over-sold’, as some players will have covered their short positions (indeed, causing the spike up).

The rolling annual forward curve for gas, increased its contango structure, underlying the continued weak sentiment. In fact, annual prices are now not far above the lows of 2016. This is perhaps even more surprising considering we have still within the grasp of winter.

With continued good LNG delivery volumes, generally milder temperatures and lower demand over the holiday period, all signals (i.e. fundamental, technical and structural) are showing bearish tendencies and would indicate lower prices are still possible as we progress through January, albeit demand will start to pick up.

UK power prices in December 2019 behaved similarly to gas, i.e. generally lower over the month with a fairly significant spike up during the third quarter of the month, before dropping down again for the holiday period.

Sentiment in the power market weakened noticeably during December, with the forward curve for rolling-annual prices now clearly showing a contango structure. Interestingly, 3-year forward prices are very similar to last year, whereas more nearby years are significantly lower. Nevertheless, unlike gas, prompt year prices are still well above the lows of 2016, indicating there is little technical resistance to prices dropping further.

Coal generally moved sideways during December, whereas CO2 prices tended to follow gas. GB£/€, and other relevant forex rates, stabilised after a resounding general election victory for the Conservatives, providing some clarity as to the likely economic direction for the next few years.

Wind-power generation is picking up (currently supplying about a third of UK’s power needs) and with prompt gas prices still around 30p/th, spot power generation costs are running at equivalent to summer price levels, or even lower when factoring in the CO2 prices.

Over recent weeks, we have also seen other technical indicators for power, including long term trend indicators, now mostly pointing down across all forward contracts. In this state, as for gas, there will need to be some significant market disruption to turn sentiment around.

Brent and other oil prices have continued to show strength through most of December and, as usual for oil, the market went in to the New Year on a bullish tone. This is somewhat supported by oil analysts who see supply/demand for oil becoming more balanced by summer 2020, albeit production of US shale products is still increasing; in fact, production from non-OPEC sources in general is increasing and as these producers tend to be more market price sensitive, this may help to stabilise prices.

As we approach the peak of winter (January and February) the UK energy market appears to be in a good place with most indicators, whether that be fundamental, structural or technical, suggesting weaker prices. Weather during this time is likely to be quite variable with some mild spells interspersed with cold periods. There is still some expectation for an extended winter, though currently forecasters do not see ‘Beast from the East’ conditions that could result in an extremely cold end March early/April.

Historically, while annualised power prices are not far below the past 5-year average price, gas prices look low, not far above 2016 lows, and whereas indicators* suggest we could see prices break these record low levels – remember, the gas market is still well oversupplied – it might be prudent to accelerate some gas purchases as we approach the 2016 levels.  For power, which still commands a relative premium over gas, flexible buyers can be more optimistic about benefitting from prices rolling down the contango.

STOP PRESS: At the turn of the year, there has been an escalation in tensions between USA and Iran, as a consequence of the US missile strike that killed the top Iranian general. Nervousness in the markets have pushed oil prices up in anticipation of aggravated responses. While we should maintain our reasoned approach, we should also expect added volatility and a ‘risk premium’ in the short to medium.

NB: * The forward-curve, as a market structure/sentiment indictor, is good for trends and medium/long-term direction but, as a so-called lagging indicator, it is often late at predicting the precise top or bottom of a market.

Dr Tony West was formerly Director of Trading and Marketing at Innogy (now Npower), Head of Trading at Scottish Power and amongst other senior wholesale trading roles recently advised Gazprom on their power business development strategy.

UK Energy Market Report written by Pulse Business Energy. Pulse is an award-winning Business Energy and Water Broker who can advise on every aspect of usage and procurement for electricity, gas and water.