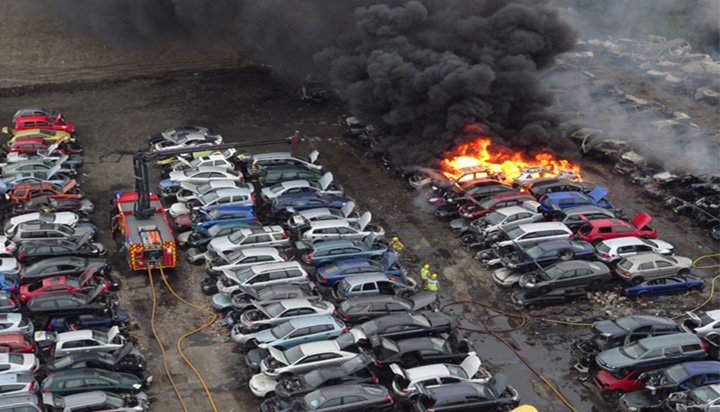 The Environment Agency (EA) is warning of an increased risk of fire at waste sites, particularly end of life vehicle facilities.

It is urging operators to have fire prevention plans (FPPs) in place following a number of severe waste fires recently amid above average temperatures and slightly lower than average rainfall, which is expected to continue over the next three months.

An incident forced Coventry Airport to close temporarily and another fire in Witney led to the public being warned of the potential for asbestos debris being deposited.

The EA said reports of fires at car breakers have “increased steadily” in recent years – it received reports of 24 fires at the end of life vehicle sites last year and 21 in 2016.

It has launched an FFP guidance which seeks to minimise the likelihood of a fire happening and advise on ways to minimise the spread of fire within the sited and to neighbouring facilities.

Some of the steps operators can take to prevent the causes of fires include disconnecting and removing batteries as soon as reasonably practical after vehicles arrive on site, using safe depollution equipment and storing fuel in containers and enforcing a no smoking policy for both staff and customers.

“It’s really important that those handling end of life vehicles have Fire Prevention Plans in place and engage with the Environment Agency for advice and support on keeping their sites safe. This is not just good for businesses but also helps to safeguard the environment and surrounding communities.”