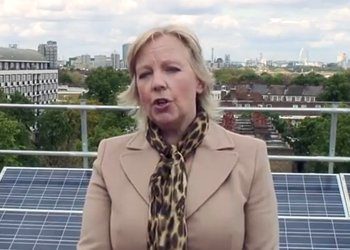 The Dragon’s Den investor struck a more positive tone than her steely appearances on the BBC’s television show in a short video, which can be found on Youtube, giving her support to clean energy.

She said: “It just makes so much sense that we start looking at sensible, alternative renewable energies to replace old-fashioned traditional resources that we know are finite.”

Talking about the investment opportunity of green energy, she added: “People ask me all the time, ‘What would you do as a long-term investment?’ and I am absolutely clear on this. If I was going to be asked to invest in one thing for the future, it would be renewable energy.”