The Scottish Government has given full consent for a wave energy farm, making it the “world’s largest” fully permitted commercial ocean energy site. The 40MW farm off the northwest coast […] 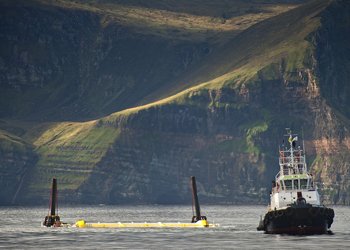 The Scottish Government has given full consent for a wave energy farm, making it the “world’s largest” fully permitted commercial ocean energy site.

The 40MW farm off the northwest coast of Lewis in Scotland was given the green light by Scottish Energy Minister Fergus Ewing at the All Energy conference in Aberdeen.

The project will include between 40-50 “Oyster” devices (pictured), which will capture energy in waves and be converted into electricity in an onshore hydroelectric plant that will be connected to the farm. When complete, the farm is expected to have the capacity to power nearly 30,000 homes.

Aquamarine Power, which will build the farm, is currently testing their second full-scale wave machine called the Oyster 800 at the European Marine Energy Centre (EMEC) in Orkney, which are now producing electricity.

Martin McAdam, CEO of the company said it is a “significant milestone”: “The goal of our industry is to become commercial and to do this we need two things – reliable technologies and a route to market. Our engineers are currently working hard on getting the technology right and we now have a site where we can install our first small farm, with a larger-scale commercial build out in the years ahead… We believe wave energy presents an important opportunity for the Isle of Lewis. Our development could provide significant economic benefit to the local community.”