The “first” grid-connected offshore floating wind turbine in the US has officially been launched. Called the VolturnUS (pictured), the 65-foot tall turbine has a total capacity of 6MW and was […] 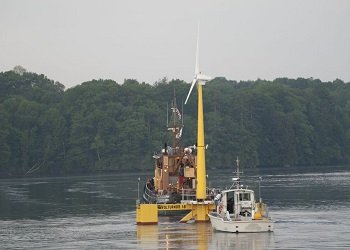 The “first” grid-connected offshore floating wind turbine in the US has officially been launched.

Called the VolturnUS (pictured), the 65-foot tall turbine has a total capacity of 6MW and was deployed in the Penobscot River off the coast of Castine in the northeastern state of Maine.

The project was funded by the US Department of Energy, which provided $12 million (£7.84m) over five years.

The University of Maine, which led the project, said in a statement: “It is the first floating turbine of its kind in the world, using advanced material systems with a unique floating hull and tower design. The programme goal is to reduce the cost of offshore wind to compete with other forms of electricity generation with no subsidies.”

Maine currently has 156GW of offshore wind capacity and plans to deploy 5GW by 2030, which is expected to attract $20 billion (£13.07bn) of private investment to the state.

Earlier this year the Energy Technologies Institute (ETI) picked a designer to make a prototype of a floating offshore wind farm in the UK.