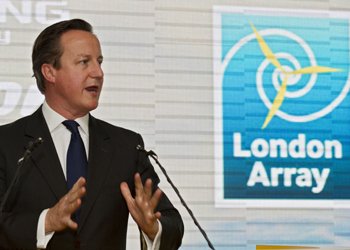 With a whopping 175 turbines, the 630MW wind farm in the Outer Thames Estuary was brought online in March 2013 and the last turbine began generating in April. It could supply around 500,000 UK homes with electricity.

Speaking at the launch event at Turner Contemporary in Margate, the Prime Minister said: “This is a great day for Kent and a great day for Britain. London Array has been built by some of the bravest seamen, the most talented engineers and hardest workers. It will bring benefits to Kent for years to come.”

Tony Cocker, chief executive of E.ON UK said his company wants to cut the cost of offshore wind by 40% by 2015.

Brent Cheshire, UK country chairman for DONG Energy added: “This project is also a real milestone on the path to cutting the cost of offshore wind. As projects get even bigger and move further offshore, we must continue to harvest the advantages of scale to bring down the costs.”