Doctors, beekeepers and surfers were among hundreds of people who marched across Westminster as part of a climate change lobby yesterday. They met with more than 100 MPs to urge […] 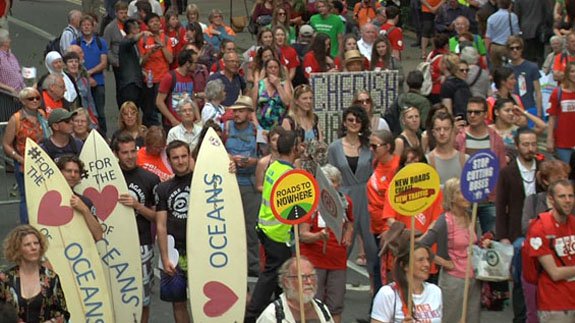 Doctors, beekeepers and surfers were among hundreds of people who marched across Westminster as part of a climate change lobby yesterday.

They met with more than 100 MPs to urge them to do more to fight climate change and discussed their views on how it could be tackled.

The ‘Speak Up for the Love Of…’ event was organised by The Climate Coalition, which represents 100 community organisations, businesses and charities including ActionAid, Christian Aid, Oxfam and RSPB.

More than 11 million people are part of the group.

The MPs met with members of the public at designated spots around Westminster, which stretched from Old Palace Yard along Millbank and over Lambeth Bridge.

The supporters held up banners which read “Cherish Nature” and “FOR THE LOVE OF THE WORLD” as well as signs with the names of different regions in the UK.

The event was hosted by a comedian and a hip-hop group performed whilst shouting out to MPs to do more for the environment.

Archie Davis, a volunteer for The Climate Coalition said: “We’re trying to lobby MPs in parliament to remind them that they need to act now and do something about climate change.

“So we’re trying to help get as many constituents as we can to go and talk to their MPs and remind them that everyone cares about climate change and they need to step up.”

Steve Double, MP for St Austell and Newquay who attended the event, added: “We need to take action to make sure that we are causing the least possible amount of damage to the planet.

“One thing I particularly feel concerned about is reducing the amount of energy we use, every new gadget, gizmo that’s created uses yet more power.

“We need to make sure our homes and our cars and all the things we use are as energy efficient as possible.”