A total of 195 nations have agreed to work together to combat climate change. The universal agreement launched at COP21 in Paris after two weeks of negotiations, aims to keep the […] 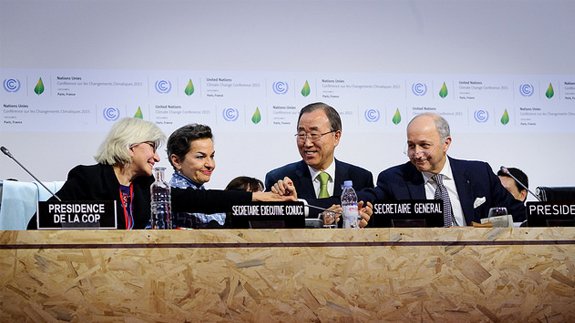 A total of 195 nations have agreed to work together to combat climate change.

The universal agreement launched at COP21 in Paris after two weeks of negotiations, aims to keep the global temperature rise well below 2°C.

Nations have also committed to drive efforts to reduce  the temperature increase even further,  to around 1.5°C above pre-industrial levels by 2100.

To reach the goal, countries’ plans to cut emissions will be reviewed every five years.

As previously agreed, they will collectively mobilise $100 billion (£65bn) per year from both the public and private sector.

The agreement text highlights that investors, businesses and policy-makers need to shift to a low carbon economy.

Christiana Figueres, Executive Secretary of the UN Framework Convention on Climate Change (UNFCCC) said the deal is an “agreement of solidarity with the most vulnerable”.

He added: “In striking this deal, the nations of the world have shown what unity, ambition and perseverance can do.

“Britain is already leading the way in work to cut emissions and help less developed countries cut theirs – and this global deal now means that the whole world has signed up to play its part in halting climate change. It’s a moment to remember and a huge step forward in helping to secure the future of our planet.”