The 13 climate change activists who protested at Heathrow Airport last year have avoided jail. Dubbed ‘Heathrow 13’, the protestors from action group ‘Plane Stupid’ have been given suspended sentences […] 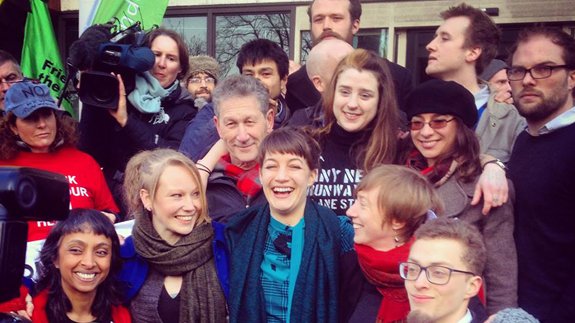 Dubbed ‘Heathrow 13’, the protestors from action group ‘Plane Stupid’ have been given suspended sentences in addition to unpaid community work.

Last month they were found guilty of aggravated trespass and entering a security-restricted area.

The demonstration, which took place in July 2015, involved activists cutting through a fence at Heathrow Airport and chaining themselves together on the northern runway.

It led to a number of flights being cancelled.

They were protesting against plans to build a third runway as they believe it will “make it impossible for the UK to meet its climate change targets”.

Graham Thompson, one of the activists sentenced to 180 hours community service said: “The court said we should prepare for immediate custodial sentences, the court said they were almost inevitable but all the support we’ve received seems to have changed their minds. Now we’re asking all those who supported us to support stopping new runways. Cameron has changed his mind before on this, it shouldn’t be too difficult to change it again.”

Friends of the Earth added “allowing dangerous climate change is the real threat” rather than protestors.

Campaigner Liz Hutchins said: “It’s right these activists have not been imprisoned for protesting to protect the planet but a suspended sentence is still deeply unjust. Peaceful protest is an important part of any democratic society.

“Climate change is one of the most urgent threats to people in the UK and around the world… History will judge the greater threat to our society; climate change or those who protest peacefully in a bid to protect people from its devastating effects.”

Last year MPs on the Environmental Audit Committee said the government should not give the final expansion approval for Heathrow until the airport proves it will comply with environmental rules.