Walker Filtration has humble roots, a business that was started in 1983 by a team of two. Since, the business has grown immensely in its native North East – and […] 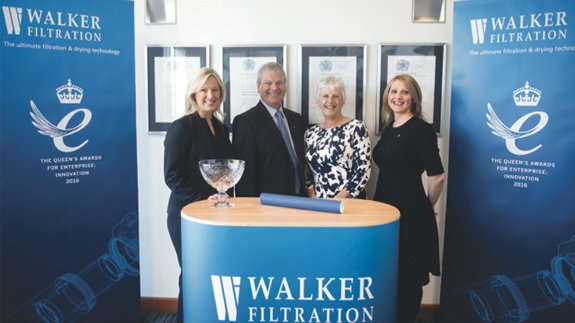 Walker Filtration has humble roots, a business that was started in 1983 by a team of two. Since, the business has grown immensely in its native North East – and is now a leader in the production of air filtration and drying equipment.

They are at the forefront of the filtration industry, currently exporting 88% of their products to over 65 countries. Not only that, but the business has recently strengthened its export strategy to increase sales of compressed air filtration products by 19%! It has also grown turnover by more than £800,000 per year since 2013, with a growth of almost one million between 2014 and 2015.

In October 2016, the brand’s success was recognised when they welcomed a representative of Her Majesty The Queen, who presented the company with a Queen’s Award for Enterprise, reflective of the global approach the business takes in the export of its products. While this was their first win in the innovation category, Walker Filtration has now been awarded the Queen’s Award five times in their 30 year history – a staggering achievement.

On the presentation of the award, Susan Windfield, OBE, gave the engineering business praise for sticking to its origins but achieving worldwide success. She said: “This is a company established, developed and based within Tyne and Wear, yet operating and supplying products worldwide, with an international reputation for innovation and excellence. My congratulations to everyone involved at Walker Filtration for this outstanding achievement in winning the Queen’s Award for Enterprise for the fifth time.”

Walker Filtration also helped local children in 2016, working alongside the Engineering Development Trust to liaise with Newcastle Royal Grammar School to get students on an Engineering in Education Scheme (EES.) This project was a six-month ‘hands-on’ work experience period to encourage future engineers.

Just as the business has been recognised for its global efforts, it has also been noticed for its commitment to the local community. The company shortlisted for not one, but two local awards at the Insider Media Made in the North East Awards 2016.

Speaking of their place on the awards, Group Managing Director, Lianne Walker MBE, commented: “Walker Filtration is extremely proud of its North East heritage, and we are passionate about investing manufacturing and engineering in the region. To be shortlisted for the Made in the North East awards, that recognise and celebrate the success of local manufacturing businesses, is an honour.”

With a successful year now drawing to a close, the engineering business sets its sights on 2017. Having already increased their global sales and been recognised in the Queen’s Awards for a fifth time, the filtration company is proof that staying local but thinking globally can help your business succeed.