If, as we are led to believe, the price reduction and therefore cost savings following Water Reform in April 2017 may be as little as 2%, Electronic Data Interchange (EDI) […]

If, as we are led to believe, the price reduction and therefore cost savings following Water Reform in April 2017 may be as little as 2%, Electronic Data Interchange (EDI) billing is likely to be the No.1 priority and the key driver in selecting a water supplier. During electricity and gas competition in the 1990s, cost savings were much larger, clearly this was the main priority.

Multi-site organisations are already including EDI in their water tenders as a prerequisite and it is likely that government procurement bodies such as Crown Commercial Services will too. This may come as a shock to any water supplier that isn’t listening to their business customers as they could miss the opportunity to tender for a water supply contract which may not be tendered again for two or three years.

Just like we had in the 1990s with electricity and gas deregulation, competition is a wonderful opportunity for organisations to get what they have been asking from the water suppliers for many years, i.e. ‘Best Practice’ in water billing. EDI invoicing to the UK utility industry common open standard, TRADACOMS file format 26v3 (UTLBIL), is common place now. Almost all electricity and gas companies can provide this capability (see table) but up until six months ago, only one water company could, Yorkshire Water. To their credit they have been providing this since 2003. 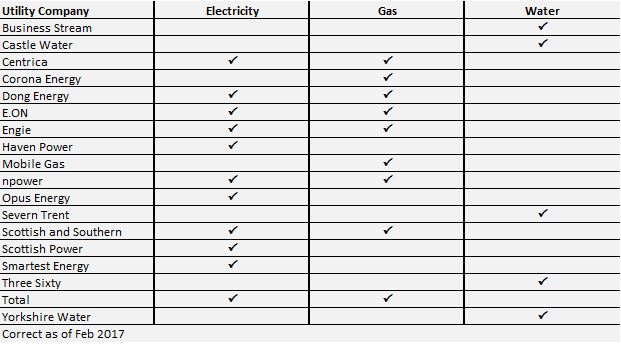 Currently, multi-site customers such as retailers, banks, local authorities, health authorities, emergency services and even housing associations obtain their electricity and gas invoices through EDI. For water, most have to toil through processing paper invoices or occasionally receive CSV files, each supplier has a differing format that can change without notice and therefore break the process. It’s important to know that EDI billing, contrary to what some utility salesmen think, isn’t a spreadsheet, CSV file, posting a PDF on a website, or even XML files despatched electronically. It’s also a myth to think that this is only something for large companies, EDI billing is also common place for organisations with only a few sites.

EDI is the computer to computer transfer of invoices between two organisations using an agreed industry standard. HM Revenue and Customs accept EDI as a ‘bill’ but other forms are merely ‘billing information’ and hard copies are required to satisfy tax requirements. I know of a few utility companies who got a nasty shock when an over enthusiastic salesman signed them up to ‘EDI billing’ and after despatching their first consolidated bill in some CSV format, were informed by the customer they were in breach of contract.

So where did it all start and what lessons can be learnt from electricity and gas competition?

We have British Telecommunications (now BT) to thank for leading the way in bringing best practice into utility billing. Back in early-1990s electricity and gas companies were privatised and by the mid-1990s competition arrived. Competition resulted in consumer power and the ability to stipulate to a utility what they wanted. The power was shifting from the state owned monopoly to the customer, keen to enjoy the process efficiencies they already enjoyed partnering with suppliers in other business sectors.  With an eye to the future competitive market, in 1993 BT invited the electricity companies to produce electronic bills.

The problem for BT was they had over 20 people in Reading processing hundreds of thousands of paper electricity, gas and water invoices for their 7,500 sites from all the regional utility companies. The information within the invoices (which is also a rich source of information for energy management) was entered into their M&T software system for validation, checking and forwarding for payment. It was also their energy management database from which they were able to carry out benchmarking, exception reporting, waste detection, financial reporting, budgeting and accruals.

Then, leading up to the competitive market in 1995, BT invited all electricity companies to a meeting. It was explained what requirements would be in their forthcoming tender, why they were asking for them, and said that they would work with electricity companies to provide it. This was to remove all paper billing, replace it with one consolidated bill for all their sites, it should be HM Customs and Excise complaint, to an industry standard format, containing sufficient detail such that all elements of the bill could be checked through their M&T software system. Basically this was the paperless, electronic ‘end to end’ processing that was then the ‘norm’ from suppliers in other business sectors. Four electricity companies were successful. Manual bill entry that took two days to input was now processed in 20 minutes. The data processing team in Reading reduced from 22 people to 10, then halved again when gas companies provided EDI billing in 1999.

The lessons from electricity and gas competition are that water suppliers need to break away from any complacency engendered from a monopoly position, listen to their customers, embrace change and be quick to implement best practice.

So how does the EDI billing process work?

The utility company tags the individual invoices that belong to a customer. If the paper invoices are sent to a single address, this is likely to be already done. There are then typically two choices to generate EDI bills:

1) the utility company builds the capability into the core billing system. This was typically the route the utilities took in the late 1990s and early 2000s.

2) the utility company uses a third party, virtually ‘off the shelf’ software. This is located on a server that is sent the billing file, maps this into TRADACOMS format, reconstructs the bills, checks the integrity of the bill, encrypts the file if required and despatches it to the customer by email or other agreed means.

The latter route tends to be favoured by the utilities now as it’s non-intrusive, inexpensive and quick to deploy.

The customer will usually receive the email message into their M&T software which will automatically process it. M&T systems are commonly used by most multi-site organisations to check bills, detect energy waste and to build a database in support of many compliance activities, such as; Carbon Reduction Commitment, Greenhouse Gas Reporting and Display Energy Certificates etc. After validating and checking the bills the software usually sends a file with reduced, but specifically defined information, to finance where it is loaded directly into the Accounts Payable system for payment – usually by BACS or Direct Debit. It is customary that the full EDI ‘parent’ bill amount is paid and any incorrect ‘child’ bills that the customer identifies are cancelled and re-billed in the next billing cycle.

So what are multi-suite organisations likely to be stipulating in their tenders?

The Energy Services and Technology Association (ESTA) represent over 120 energy services companies including more than 80% of the M&T software suppliers in the UK. The specialist aM&T group within ESTA, in conjunction with customers, have produced a ‘Best Practice Guide, EDI Billing – The use of the TRADACOMS 26v3 Open Standard by Utility Companies’ https://connect.esta.org.uk/wp-content/uploads/2016/12/ESTA-EDI-OpenStandards-December-2016.pdf

This summarises the benefits to both the customer and utility company,  indicates which utilities provide EDI and includes wording that can be ‘cut and pasted’ into electricity, gas and water tenders to invite ‘best practice’ from their supplier.

The four main elements, which are important to include in tender documentation so both parties understand and agree their obligations, are as follows;

So how are water companies faring?

As previously mentioned, almost all electricity and gas suppliers, can provide EDI billing. Three of the new water retailers can now provide this industry standard billing and others are at various stages of implementation.

Karen Butcher, Commecial Analyst at Greggs, which has 1,700 sites said: “It will definitely be a deal breaker if a supplier can’t provide us with TRADACOMS industry standard billing. Our aim is to use one supplier throughout the UK. We’ve had a few suppliers contact us but nowhere near as many as I expected there to be.”

The energy manager of one local authority told me: “90% of our water is supplied by one water company. It takes us ages to go through their CSV files, check it, sort out their columns and formats before we can use it. It will cost us thousands of pounds to go out to tender through OJEU and if we can save 2% that’s £60k per year plus big reductions in administration time and costs. If we can get them to provide EDI billing like we get for electricity and gas we may not need to go out to tender. “Alternatively we can us one of the new public sector frameworks such as the  Crown Commercial Services Water Framework that stipulates this.”

An EDI billing capability is not only an acquisition tool to attract new customers in 2017 it’s a retention one too, to keep existing customers in their own area.

So whether or not you decide to tender or negotiate your current contract with your incumbent water company, ensure you ask for EDI billing. In addition to reduced water costs it will save you a lot of time, reduce admin costs and aid a smooth transition!