Soils could release much more Carbon Dioxide (CO2) into the atmosphere as the climate warms. That’s according to new research by scientists, whose findings are based on a field experiment […] 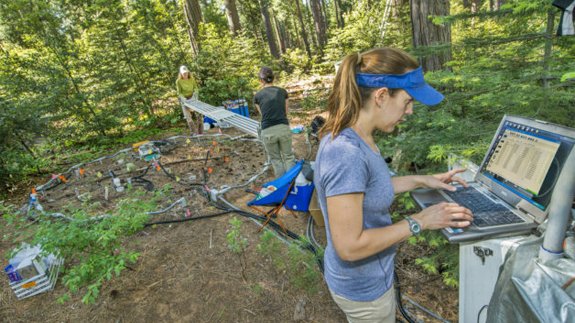 Soils could release much more Carbon Dioxide (CO2) into the atmosphere as the climate warms.

That’s according to new research by scientists, whose findings are based on a field experiment that, for the first time, explored what happens to carbon trapped in soil when all the layers are warmed.

In this case, it extended to a depth of 100 centimetres.

Scientists at the US Department of Energy’s Lawrence Berkeley National Laboratory discovered warming both the surface and deeper soil layers increased the annual release of CO2 by 34% to 37% over non-warmed soil.

Much of the CO2 originated from deeper layers, “indicating that deeper stores of carbon are more sensitive to warming than previously thought”.

Past research has suggested warm temperatures will cause soil to release 9% to 12% more CO2 than under normal conditions.

The scientists say their findings suggest the degree to which soil carbon influences climate change may be currently underestimated.

Caitlin Hicks Pries, Postdoctoral Researcher in Berkeley Lab’s Climate and Ecosystem Sciences Division said: “If our findings are applied to soils around the globe that are similar to what we studied, meaning soils that are frozen or saturated, our calculations suggest that by 2100, the warming of deeper soil layers could cause a release of carbon to the atmosphere at a rate that is significantly higher than today, perhaps even as high as 30% of today’s human-caused annual carbon emissions depending on the assumptions on which the estimate is based.”

UK researchers also found rising temperatures could speed up climate change by increasing the amount of methane released by ponds and reducing CO2 stored in them.