A former UN climate chief is calling on businesses, investors and policymakers to “bend the curve” on emissions by the end of the decade. Christiana Figueres, who finished her […]

A former UN climate chief is calling on businesses, investors and policymakers to “bend the curve” on emissions by the end of the decade.

Christiana Figueres, who finished her term as Executive Secretary of the UN Framework Convention on Climate Change (UNFCCC) last July, believes it is possible for emissions to peak by 2020 if bold action is taken

She adds if action is taken now, there will be enough time after 2020 for a “soft gradual transition” towards a decarbonised economy by 2050 and it helps ensure the world achieves the Paris climate goals.

Ms Figueres spoke to ELN yesterday at the launch of ‘Mission 2020’, where she was joined by a group of leading climate and business experts who encouraged urgency and action in the next three years.

The campaign identifies 2020 as a “game changing opportunity” and “critical turning point” in the race to tackle climate change.

Businesses, investors and policymakers are being urged to take bold but achievable steps in the next three years so major milestones are reached by the end of the decade.

The sectors that have a role to play include energy, transport, infrastructure, land use, industry and finance. 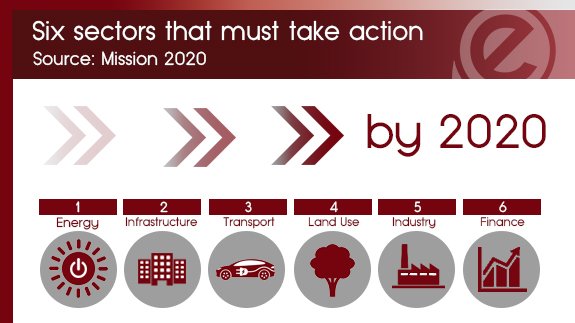 Ms Figueres told ELN the world needs to produce 30% of energy from renewables by 2020, which “we’re already approaching”.

She believes much more needs to be done on transportation, targeting 25% of vehicles on the road to be electric – currently hovering around 1%-2%. She adds another “really difficult area” is conversion of land as land is much more a source of emissions that a sink.

Finance, she said, is also crucial, with the world needing to invest at least $1 trillion (£0.8tn) in clean technologies per year.

The former UN climate chief adds what the private sector has been doing since the Paris climate deal has been “very exciting”, with respect to renewable energy, new innovative technologies and announcements of aviation going electric.

She believes technology is progressing “not just quickly, but exponentially towards a decarbonised economy”.

Ms Figueres told ELN: “Because decarbonising the economy makes fundamental economic sense, in addition to all of the other arguments, the ideal of course is when government provides the necessary incentives and policies and the private sector is able to use those incentives in order to do the transformation and the investments that they need to do.

“So in those countries in which that is happening and in which there is a very, very good collaboration between private and public sector, those are the countries that are going to decarbonise the quickest. There are other countries in which those policies are not forthcoming but the private sector is moving forward anyway. Why? Because it is good for their bottom line.”