Co-op to replace single-use plastic bags with compostable ones

The new alternatives can be reused as food waste caddy liners 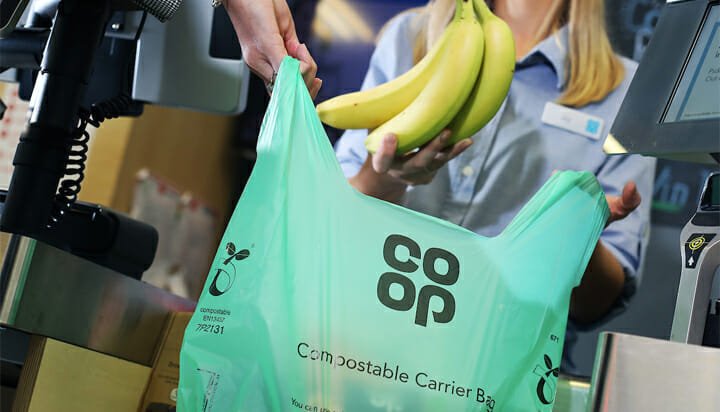 Co-op has announced plans to scrap single-use plastic bags at its stores and replace them with biodegradable ones.

The supermarket expects the move to eliminate around 60 million plastic bags as part of its phased rollout.

Lightweight compostable carrier bags, which can be reused as food waste caddy liners, will be rolled out to almost 1,400 Co-op stores across England, Scotland and Wales – initially in towns, cities and villages where the bags are accepted in food waste collections.

The initiative is part of Co-op’s plans to eliminate its own-brand black and dark plastic packaging, including ready meal trays, by 2020 and its own-brand packaging to become recyclable by 2023.

It has also pledged to use a minimum of 50% recycled plastic in bottles, pots and trays by 2021.

Retail Chief Executive Jo Whitfield said: “The price of food wrapped in plastic has become too much to swallow and from today, the Co-op will phase out any packaging which cannot be reused.

“The first step to remove single-use plastic will be to launch compostable carrier bags in our stores. They are a simple but ingenious way to provide an environmentally-friendly alternative to plastic shopping bags.”

The supermarket sources 100% renewable energy for its stores and claims to have reduced plastic use equivalent to taking out 125 million plastic water bottles from production so far.