ClientEarth argues the project, if given the go-ahead, ‘will risk locking in high carbon energy on the grid until 2050’ 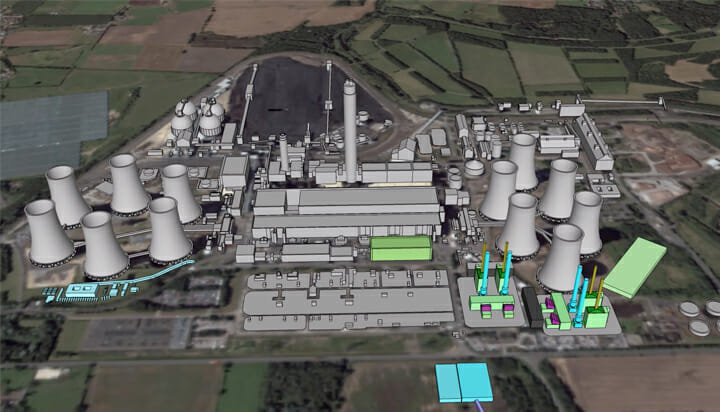 Drax submitted an application to convert two coal-fired units at its Selby power plant in North Yorkshire to four combined cycle gas turbines (CCGT), with up to 3.6GW of capacity as well as up to 200MW of battery storage facility.

The environmental lawyers argue the gas plant, if given the go-ahead, “will risk locking in high carbon energy on the grid until 2050” and claim the project breaches the government’s climate change recommendations.

They add it will “nearly treble” the units’ generation capacity and could lead to a “significant increase” in their greenhouse gas emissions.

The government estimates the UK will need 6GW of new gas generation through to 2035, however, it has already approved more than 15GW of large-scale gas plants – ClientEarth says approving Drax’s project would take the total capacity to 18GW, three times the government’s estimates.

They believe the proposed gas conversion threatens to displace low carbon energy that could otherwise replace the units’ generation capacity once they are retired.

Sam Hunter Jones, Climate Accountability Lawyer at ClientEarth said: “The UK Government claims to be a climate leader, yet it major energy projects such as this from Drax are granted planning consent, the UK will risk carbon lock-in that would seriously undermine its ability to meet its climate change commitments. Approving this new gas capacity risks either throwing the UK’s decarbonisation off course or locking in redundant infrastructure resulting in significant environmental impacts and costs to the taxpayer.

“The only way this project can survive the future is with carbon capture and storage – a technology that is not economically viable and one not expected to be soon enough to meet the UK’s carbon targets, if at all. The IPCC’s recent report comes as a serious warning about the need to decarbonise as fast as possible to avoid catastrophic global warming impacts.”

ClientEarth has previously won legal action against the UK Government’s air pollution strategy – but this is its first challenge against a gas project in the country.

Andy Koss, CEO of Drax Power added: “By reusing some of our existing infrastructure, including the grid connection and cooling towers, the development will be cost effective and very competitive. It could also enable us to stop using coal as soon as 2023, well ahead of the government’s 2025 deadline, reducing our emissions whilst playing a vital role in supporting the system as more renewables come online.

“The IPCC’s recent report stated that in order to meet our climate targets, up to 85% of power generation will need to come from renewables, by 2050. This means the remainder will need to be provided by other flexible, lower carbon technologies which are able to balance the system and keep the lights on. The Committee on Climate Change has also said there will be a need for flexible gas plants, in order to meet the generation gap in the 2020s – and recent analysis by Imperial College London for Electric Insights recognised the vital role of flexible power generation, like gas, in controlling the costs of supporting the system as more renewables come online.”