Air pollution is considered the biggest environmental threat to health in the UK, with between 28,000 and 36,000 deaths a year attributed to long-term exposure 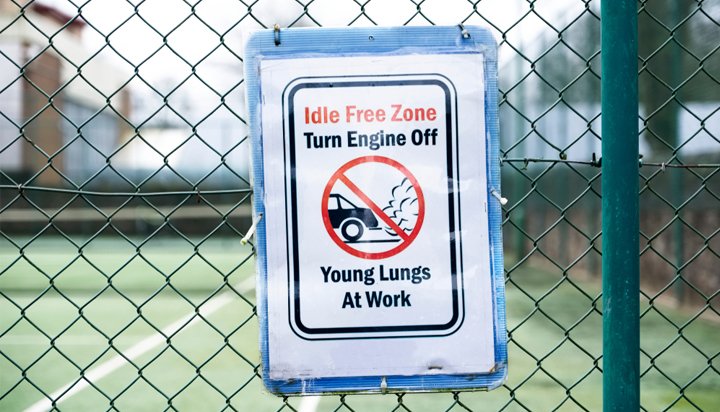 The UK’s public health agency is proposing the implementation of no-idling zones outside schools to reduce air pollution.

It is part of Public Health England’s (PHE) recommendations on how to improve air quality across the country.

It suggests local authorities could implement a ban on idling in areas with vulnerable populations, including schools, hospitals and care homes, to ensure less exposure to harmful pollutants.

Air pollution is considered the biggest environmental threat to health in the UK, with between 28,000 and 36,000 deaths a year attributed to long-term exposure.

The health and social care costs of air pollution in England is estimated to reach £5.3 billion by 2035 unless action is taken.

The report adds emissions from road vehicles should be targeted by promoting the use of public transport, cycling and electric vehicles (EVs) and discouraging highly polluting vehicles from entering populated areas as well as targeting emissions from wood burners and replacing them with cleaner fuels.

It also recommends local and national government to provide guidance for members of the public explaining how to reduce their exposures to air pollution, training for health professionals, school governors and staff as well as social care professionals.

Other key recommendations include:

Professor Paul Cosford, Director of Health Protection and Medical Director at PHE said: “Now is our opportunity to create a clean air generation of children, by implementing interventions in a co-ordinated way. By making new developments clean by design, we can create a better environment for everyone, especially our children.

“We recommend that at a local level, any new policy or programme of work which affects air pollution should aim to deliver an overall benefit to the public’s health. So transport and urban planners will need to work together, with others involved in air pollution to ensure that new initiatives have a positive impact.

“Decision makers should carefully design policies to make sure that the poorest in society are protected against the financial implications of new schemes.”

Air pollution has a significant effect on public health and poor air quality is the largest environmental risk to public health in the UK. Costs to society are estimated at more than £20 billion severy year.

Epidemiological studies have shown that long-term exposure to air pollution (over several years) reduces life expectancy, mainly due to cardiovascular and respiratory causes and from lung cancer. The annual mortality burden of human-made air pollution in the UK is roughly equivalent to between 28,000 and 36,000 deaths. Short-term exposure (over hours or days) to elevated levels of air pollution can also cause a range of effects including exacerbation of asthma, effects on lung function, increases in respiratory and cardiovascular hospital admissions and mortality.

More recent research is recognising that the systemic effects of pollutants extend beyond the cardiopulmonary system to affect many other organs, increasing the risk of disease that begins from conception and persists across the life course, with studies showing possible effects on dementia, low birth weight and diabetes.

Statistics from Defra’s Emissions of air pollutants in UK report (1970-2019) suggest NOx (oxides of nitrogen) emissions from transport make the largest contribution to the UK total, accounting for 34% in 2017. Emissions from energy and manufacturing industries are also major contributors to NOx pollution. Although emissions from the agriculture sector are not significant when considering NOx or SO2 (sulphur dioxide), most emissions of NH3 (ammonia) come from agriculture, with the sector accounting for 88% of total UK emissions in 2016. For NMVOCs (non-methane volatile organic compounds), the largest source is industrial processes using large amounts of solvents, accounting for 54% in 2016.