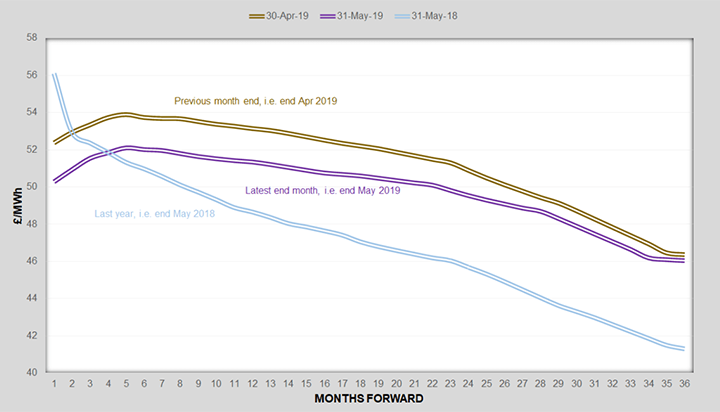 Prices were much less volatile this past month (May 2019) and generally trended back down again to the levels we experienced mid-March 2019. Rolling-annual forward curves also drifted down and structurally demonstrated more contango, though longer dated power still exhibited some backwardation.

Prompt (spot) market prices continued to weaken gradually over the month as the prices rolled down the contango, despite some nervousness beyond 4Q19.

Good LNG send-out persisted, which alleviated some disruption from Norwegian supplies of piped-gas. Gas storage levels remain high and over all the supply/demand balance was comfortable.

May weather was typically changeable with both warm and cold spells.

Forward annual UK gas prices decreased during May 2019, despite continued inconsistency in supply of piped-gas from Norway; some planned and some unplanned maintenance.

The forward curve for rolling-annual gas prices maintains a prompt contango structure, and even longer dated prices are displaying slight contango now, supporting a weak sentiment for the coming summer; potentially the weakness in gas will continue beyond then too. Fundamentally, storage levels remain comfortable across Europe and we have continued to see several LNG cargoes arrive at European regasification terminals, though it is possible the number of cargoes will reduce over the coming weeks, which might worry the market somewhat if that situation extends for several weeks.

Technically, signals have become more consistent with other indicators; further supporting a likely reduction in prices in the short to medium term.

The UK power prices weakened over the month with the forward-curve for rolling annual prices tipping more to contango. Prices, while generally following gas, were also impacted by the juxtapose of warm weather reducing demand, good levels of wind-power production when the wind picked up (and temperatures dropped) plus the fluctuating coal market. The market retains some concerns for power prices beyond next summer, due to the ever-increasing reliance on intermittent renewable power, particularly in the unlikely event that Brexit results in the EU interconnection being seriously disrupted.

Technical indicators are not as bearish in the medium term, as in the case for gas, though short term, without some freak event, power prices can continue weaker during summer.

Since the dying days of April, the oil market has changed direction, and taken a turn downwards. Much of this was driven by financial market concerns relating to various US trade issues/disputes under discussion.

Fundamentally, oil supply should improve over the year, extreme OPEC action apart, and this improving supply picture is being demonstrated by a reduction in oil backwardation for the annual contracts. Many other fundamental and technical signals also suggest we will start to see oil prices dropping further in the short to medium term.

The summer months continue to roll down the near term contango, keeping prompt price levels at good value. At this moment, the gas seasons (win19/10 and Sum 20/21) are also in contango so it is reasonable to assume that, just as the current market favours flexible purchasing, the situation will continue going in to winter, particularly if gas purchases can be held off until month ahead. Expectations are, by the time we get to the end of the summer, that power winters will be in contango too, though this is not the case yet and can’t be relied upon – a bit more prudence may be required when managing power contracts, keeping to quarter-ahead purchasing as we get to the end of summer.

If oil and US LNG prices maintain their bearish trend, it is hard to see how the market will escape the current trend. However, we must be wary of when markets drop too fast too soon as another sharp rebound the before market ‘resets’ is possible; the US trade disagreements with China and Mexico will settle and some point, and at such time, it could trigger a rally.

As for recent months, with prompt month prices holding down, there is, in essence, no pressing need to change strategy to longer-term purchases. In the meantime, we must not get too complacent, and be ready for any sharp moves in either direction.