Why nuclear hasn’t been mentioned at COP21

World leaders have made various pledges on tacking climate change at the COP21 conference in Paris since Monday. However, while renewables and low carbon technologies have been mentioned, nuclear power […] 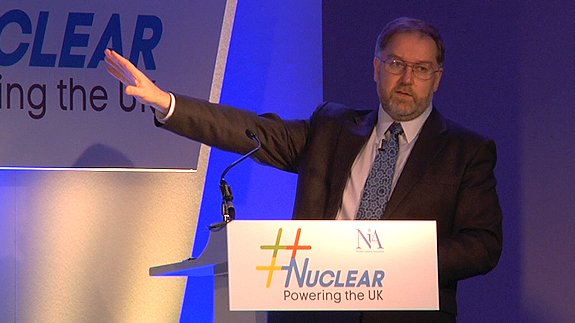 World leaders have made various pledges on tacking climate change at the COP21 conference in Paris since Monday.

However, while renewables and low carbon technologies have been mentioned, nuclear power hasn’t been part of the debate.

That’s because countries have divided opinions on supporting nuclear which could make negotiations to tackle climate change difficult, according to Robin Grimes, Chief Scientific Advisor at the Foreign & Commonwealth Office.

He told ELN: “It’s been very interesting the way nations have been into two groups. Those who have become even more keen on nuclear and those who have moved away very much from nuclear so we seem to have sort of two very different populations.

“So when you’re bringing lots and lots of nations together because they have such diametrically opposing views on nuclear then often it’s easier to get agreements when you perhaps leave nuclear for a discussion later on. That doesn’t necessarily mean that nuclear is left out of it, it’s just that we need to reach some consensus on these issues now.”

However Mr Grimes, who is also a professor at Imperial College London, believes in future meetings “we will hear more and more about nuclear”.

He added a balance “between emerging economies and established economies” is necessary to get a deal to tackle climate change.

At the ‘Nuclear – Powering the UK’ conference in London yesterday, he said sometimes it’s difficult to make some politicians understand the risks of climate change.

He added: “The politicians that really understand it are doing their best to explain the issues to those who perhaps don’t understand it. We can do a lot to help those people get those messages across so the politicians can take informed decisions.

“Actually I’m not sure I mind what decisions are made as long as they really contribute to our sustainable society and they are made from an informed point of view.”