Wind “will be cheapest form of energy”

The chief of a British onshore wind developer is predicting wind energy will be cheaper than gas – and eventually be the cheapest form of electricity overall. Ian Mays, Chief […] 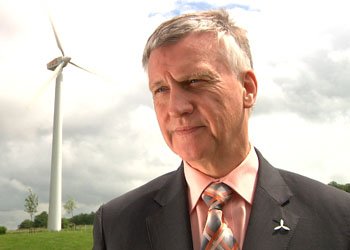 The chief of a British onshore wind developer is predicting wind energy will be cheaper than gas – and eventually be the cheapest form of electricity overall.

Ian Mays, Chief Executive Officer of RES Group believes the rising demand for gas around the world will push its prices up favourably compared with wind.

While onshore wind is a “little bit more expensive at the moment” at around 8.5p per kilowatt hour (kWh) in the UK compared with the cost for a new gas station of between 7-7.5p per kWh, he said, “that’s not going to be the case in the future”.

He told ELN: “What you can expect is that gas prices will rise whereas wind will remain pretty steady, so at some point there will be a cross over. There’s a finite amount of gas available, there’s a lot of countries around the world need their supply, prices will rise increasingly in the future as the gas between supply and demand rises.

“In a relatively short period of time actually electricity prices from wind will actually be cheaper than the cost of gas, so it will be the cheapest form of electricity in future.”

Over the weekend, Cabinet Office minister Oliver Letwin was reported as suggesting subsidies for onshore wind will have “disappeared” by 2020 in an email to the Dorset branch of the Campaign for the Protection of Rural England. However government spokesmen have attempted to diffuse suggestions there is a government rift over wind power.