The UK’s wave and tidal sector could get a huge boost as the Crown Estate is considering investing up to £20 million in the industry. It plans to invest in […] 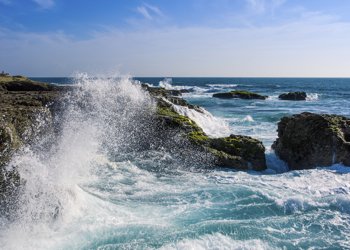 The UK’s wave and tidal sector could get a huge boost as the Crown Estate is considering investing up to £20 million in the industry.

It plans to invest in two projects with a total installed capacity of 3MW or higher, alongside other firms and with grant support from the Government. To be eligible for the fund, the projects must already have a Crown Estate agreement for lease and have or soon obtain consent and grid connection agreements.

The announcement follows a report last year which found there is potential for tens of gigawatts of wave and tidal projects around the UK.

Rob Hastings, Director of the Energy and Infrastructure Portfolio said: “Several wave and tidal stream technologies are now proven and it is timely for the industry to move on to demonstration projects. First arrays are important because they are on the critical path to larger schemes around the UK and worldwide. By bringing our capital and expertise to bear, we hope to catalyse investments by others and to see projects proceed to construction and operation as soon as possible.”

The Renewable Energy Association (REA) welcomed the news and said it would be beneficial for developers that find it hard to attract investment and also give confidence to potential investors.

Dr Stephanie Merry, REA’s Head of Marine Renewables said: “The early-stage risks and long payback periods for investment in wave and tidal energy can make it difficult for budding and innovative developers to attract finance for projects. Recent political uncertainty – not least over how the Energy Bill will be made to work for renewable energy – have only exacerbated the situation.

“The Crown Estate is a well established and well respected body in the sector and by putting its own money where its mouth is, we expect this to boost the confidence of other prospective investors. There’s still a long way to go for marine renewables in the UK but interventions like this will be recorded by future technology historians as key milestones in the development of marine renewables and indeed the broader manufacturing renaissance in which renewable energy can – and we hope will – play a major part.”

The Crown Estate has leased 41 wave and tidal sites around the UK to date, with a total potential capacity of approximately 2GW. It claims this is believed to be more than any other country, with the development pipeline helping the UK build and maintain a global lead in wave and tidal energy.