Staff and students at the University of Bradford slashed their energy bill by a third by keeping tabs on their energy use over 16 months. The EMU scheme at the […] 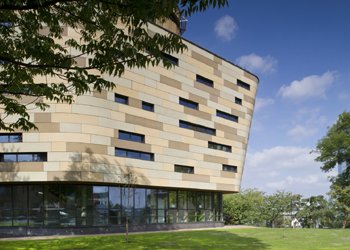 Staff and students at the University of Bradford slashed their energy bill by a third by keeping tabs on their energy use over 16 months.

The EMU scheme at the university’s School of Health Studies (pictured) was so successful it prompted emergency calls from the energy supplier who thought the meters had broken.

The project was designed to change the behaviour of staff and students using an energy monitoring system from Utilitywise called E:dde. The circuit level meant students could track the energy use of appliances and measure the savings achieved by changes in behaviour.

In one case they tracked down a faulty fan on cooker in a kitchen which was using lots of energy.

Hilary Pape, a Physiotherapy lecturer said: “It allowed us to root out ‘rogue’ power usage and as it gave us real time information on output it allowed us to see whether we were having an effect when we switched stuff off.”

Russell Smith, estates manager at the University of Bradford, is currently installing the device in five more buildings. He said it was well worth “analysing energy use to an extremely detailed level”.