Manufacturing giant Siemens has today opened the UK’s first tidal power production plant in Bristol. The new 25,000 square feet facility will be the base for testing and assembling “next […] 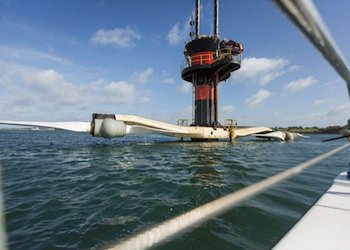 The new 25,000 square feet facility will be the base for testing and assembling “next generation” drive trains used in SeaGen (pictured), the tidal turbine developed by Bristol-based Marine Current Turbines (MCT), now a fully-owned Siemens business.

The SeaGen devices built in Bristol will be deployed in two tidal projects – the 10MW Skerries project in Wales and the 8MW Kyle Rhea project in Scotland by 2016.

He said: “Siemens’ new testing and assembly facility for tidal turbines in Bristol is a real boost for the South West and for the UK’s world leading marine energy industry. Wave and tidal power has an important part to play in our low carbon energy mix, with the potential to sustain up to 19,000 jobs in this sector alone by 2035.

“That’s why the Coalition has announced levels of support for wave and tidal power generation that are higher than any other low carbon technology. I want to see the sector take the final steps to get these exciting technologies to market, so it’s great to see Siemens ramping up their involvement in marine power, I wish the new centre every success.”