A UK University has saved £2,200 on its energy bills and cut 13.6 tonnes of carbon emissions by installing LED lighting. Aston University in Birmingham also claims to have reduced […] 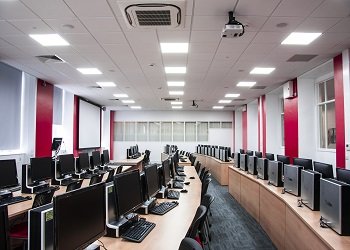 A UK University has saved £2,200 on its energy bills and cut 13.6 tonnes of carbon emissions by installing LED lighting.

Aston University in Birmingham also claims to have reduced its energy usage by a staggering 88% – or 26,000kWh – by upgrading the lighting in its IT labs (pictured) funded by Government-backed Salix Finance.

It installed 60 LED lights developed by Tamlite, with a total circuit load of 50MW and a lifespan of 50,000 hours and ceiling-mounted sensors that switches the light on instantly when someone enters the lab and switches off automatically as well.

Andrew Bryers, the University’s Energy Manager said: “There’s no doubt that LED is a technology with huge benefits, in terms of saving energy, cutting carbon and reducing maintenance.

“The IT labs are not in constant use. However, with students coming and going at all times of the day and night, the lights tended to be left on permanently. In the past, this was a source of energy waste that we just had to deal with.”

The University has set a target to cut carbon emissions by 48% by 2020.