Pentland Firth could provide ‘half of Scotland’s electricity’

Tidal turbines in the currents between the Scottish mainland and the Orkney Island have the potential to generate up to 1.9GW of power – equivalent to almost half of Scotland’s […] 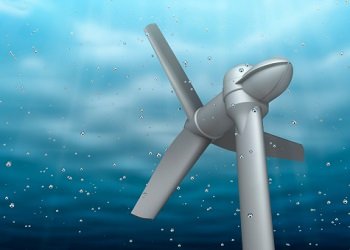 Tidal turbines in the currents between the Scottish mainland and the Orkney Island have the potential to generate up to 1.9GW of power – equivalent to almost half of Scotland’s electricity needs.

That’s according to researchers at Oxford University whose new study highlights the huge potential of tidal power in the Pentland Firth and says it is one of the best tidal sites in Europe.

The figure – equivalent to 16TWh per year – is significantly lower than previous estimates for the generating capacity of the firth, which has been as high as 10GW. The researchers suggest the drop is due to the study taking into account how feasible the turbines are to build, how they would interact with each other and the fortnightly and seasonal tidal variations.

Their calculations suggest that while the chances of extracting the first 500MW of energy are “very promising”, the increasing difficulty of extracting more and more energy towards the maximum of 1.9GW means a target of 1GW is “most realistic”.

Dr Thomas Adcock of Oxford University’s Department of Engineering Science and lead author of the report said: “Pentland Firth promises to be one of the best sites in the world for tidal power… Our study provides the first robust data about how much energy it would be feasible to extract. It also suggests that to be efficient any scheme would have to be ‘joined up’ so that, for example, individual tidal turbines do not cancel each other out and provisions are made to store the greater energy produced by spring tides and feed these back in at neap tides.

“Building handfuls of turbines in plots of ocean leased out to individual developers is not going to extract the maximum energy from the Pentland Firth. To make the most of this unique site the placement of turbines would need to be carefully planned.”

Earlier this year, the Scottish Government gave full consent for a wave energy farm off the northwest coast of Lewis in Scotland while three Universities are combining their expertise and experience to launch a new facility for offshore wind energy in the country.