Several arrests were made today after anti-shale gas protestors were forcibly moved from blocking the entrance to a drilling site in Sussex. It makes a second day of protest action […] 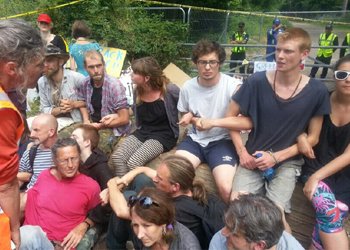 Several arrests were made today after anti-shale gas protestors were forcibly moved from blocking the entrance to a drilling site in Sussex.

It makes a second day of protest action from local residents and activists at the shale gas drilling firm Cuadrilla Resource’s site in Balcombe.

Around 60 people gathered this morning, pulling a tree trunk in front of a main gate and sitting in front of it (pictured), apparently preventing 15 trucks from accessing the site.

Sussex police confirmed 14 people were arrested, five for causing danger to road users and nine for breaching a trade union law which rules against “attempting to stop drivers and other workers from accessing the site”.

In a statement the force said: “All the arrests have been made peacefully.”

However the Frack Off group which helped organise the road blockade complained of “heavy-handed” action from the police.

One member of the group told ELN members of the local community taking part in the demo were “very shocked” when some people were “dragged” away from the blockade, claiming some children present at the protest were “crying”.

Ashley Williams, a protestor who witnessed the arrests said: “This is a totally disproportionate response. The community are standing up for themselves against a company that is trying to poison them.”

Cuadrilla Resources suggested a “majority” of protestors had been “good-natured” but was “disappointed by a minority. In a statement it added it remains “committed to undertaking the approved activity as soon as is reasonably possible”.