The first facility dedicated to recycling cartons in the UK has officially been opened in Stainland in West Yorkshire. The new plant is expected to significantly boost recycling rates in […] 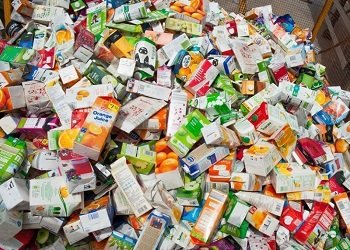 The first facility dedicated to recycling cartons in the UK has officially been opened in Stainland in West Yorkshire.

The new plant is expected to significantly boost recycling rates in the country as it is capable of recycling up to 40% – or 25,000 tonnes – of the cartons manufactured in the UK food and drink market every year. That’s 1.25 billion cartons which could be recycled, which laid end-to-end could wrap around the circumference of the earth six times.

When running at its full capacity of 25,000 tonnes, the facility has the potential to reduce landfill taxes for local authorities by £3.6 million.

The project is a joint initiative between the Alliance for Beverage Cartons & the Environment (ACE) UK and paper and packaging producer Sonoco Alcore.

The facility will help reduce road and rail miles travelled as cartons collected through ACE UK previously were recycled at mills in Sweden. Recycling the cartons at the new UK plant is expected to cut 122 tonnes of transport-related carbon emissions.

Lord de Mauley, Minister for Resource Management said: “Dealing with waste and recycling properly is not only good for the environment but can boost economic growth and create jobs… There is a huge global market for waste and recycling and I want to see UK businesses leading the way on this and helping us compete in the global race.”

Cartons collected in more than 180 local authority areas are already set to come to the new facility for recycling. By the end of 2013, ACE UK expects another 10 local authorities to start collecting cartons and sending them to the carton recycling facility.