Scientists have generated energy from small fake tattoos – by using sweat as a power source that could eventually charge a mobile phone. University of California San Diego researchers reported […] 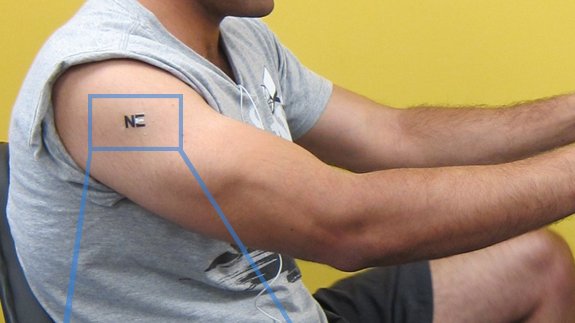 Scientists have generated energy from small fake tattoos – by using sweat as a power source that could eventually charge a mobile phone.

University of California San Diego researchers reported this week they have designed a sensor in temporary tattoo paper that can monitor a person’s progress during exercise and also produce power.

The device detects and responds to lactate which is naturally present in sweat. Usually the more intense the exercise, the more lactate the body produces.

The sensor on a temporary tattoo contained an enzyme that strips electrons from lactate, generating a weak electrical current. The researchers applied the tattoo to the upper arms of 10 healthy volunteers.

Then they measured the electrical current produced as the volunteers exercised at increasing resistance levels on a stationary bicycle for 30 minutes. In this way, they could continuously monitor sweat lactate levels over time and with changes in exercise intensity.

Wenzhao Jia, a PhD researcher said: “The current produced is not that high, but we are working on enhancing it so that eventually we could power some small electronic devices.

“Right now, we can get a maximum of 70 microWatts per cm2, but our electrodes are only 2 by 3 millimeters in size and generate about 4 microWatts — a bit small to generate enough power to run a watch, for example, which requires at least 10 microWatts. So besides working to get higher power, we also need to leverage electronics to store the generated current and make it sufficient for these requirements.”

The findings were presented at at a meeting of the American Chemical Society.