Gatwick airport and huge swathes of the south east are sitting on up to 100 billion barrels of oil. Preliminary results from test drilling by exploration firm UK Oil & […] 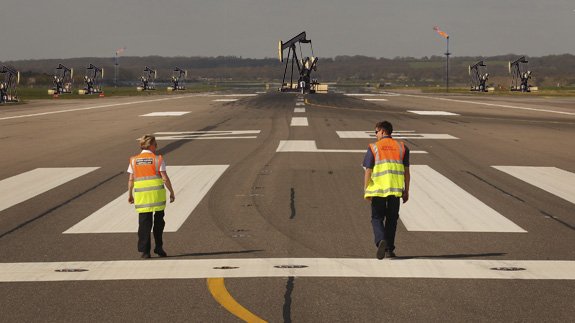 Gatwick airport and huge swathes of the south east are sitting on up to 100 billion barrels of oil.

Preliminary results from test drilling by exploration firm UK Oil & Gas Investments (UKOG) reveal the Weald covering parts of Kent, Sussex, Surrey and Hampshire could have as much as 158 million barrels of oil per square mile.

The prediction comes from analysis of a test well drilled at Horse Hill by Gatwick airport last year. Not all of the oil could be recovered but up to 15 billion barrels could be produced.

Stephen Sanderson, UKOG’s chief executive told the BBC: “We think we’ve found a very significant discovery here, probably the largest [onshore in the UK] in the last 30 years and we think it has national significance.”

Oil has been produced in the south east for decades but the latest discovery proves there could be far more than ever previously predicted. The majority of this new oil is a seam of sandstone and limestone laid down in the Upper Jurassic period and is between 2500 and 3000ft under ground.

Ken Cronin, Chief Executive of UK Onshore Oil and Gas – the trade body representing onshore oil exploration companies agreed the potential in the Weald could be a game changer.

He said: “We have been drilling for oil and gas onshore in the UK for over 100 years. There are a number of sites in the South of England that have been producing oil for many years with great care for the environment and with no impact on local communities.

“These initial results suggest a very large volume of oil in place, which could potentially help to stem the rise in oil imports and improve Britain’s energy security and balance of payments.  Further appraisal work will be needed to test what could be economically and technically recoverable.”

One concern raised is how the oil will be recovered.

Last year, a report for the government by the British Geological Survey estimated that the region may have shale oil resources in the range of 2.2-to-8.5 billion barrels. Fracking is primarily the way to get at this oil and obviously there have been major protests in places such as Balcombe over the use of the controversial extraction method.

But UKOG says this new oil discovery can be reached without fracking. It said the structure of the limestone where the oil basin lies means “these reservoirs can be successfully produced using conventional horizontal drilling and completion techniques.”

The company says more drilling and well testing will be needed and extraction is still many years away.