One of NASA’s spacecraft has broken the record for the most distance travelled using solar power. The milestone occurred on Wednesday this week when Juno, worth $1.1 billion (£0.76bn), was […] 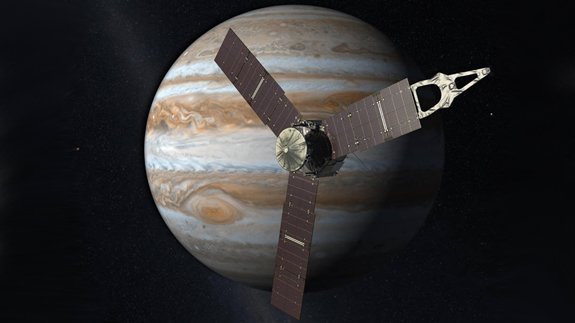 One of NASA’s spacecraft has broken the record for the most distance travelled using solar power.

The milestone occurred on Wednesday this week when Juno, worth $1.1 billion (£0.76bn), was around 493 million miles from the sun.

Launched in 2011, Juno was the first solar-powered spacecraft designed to operate at such a great distance from the sun. That’s why the surface area of the solar panels required to generate enough power is quite large, according to NASA.

The four-ton spacecraft carries three 30-foot-long solar arrays with more than 18,600 individual solar cells. They have the potential to generate around 14KW of electricity.

Juno is currently heading towards Jupiter and is expected to reach there on 4th July this year. It will orbit around the planet for a full year, studying the planet’s atmosphere and gravitational and magnetic field.

Scott Bolton, Juno Principal Investigator at the Southwest Research Institute in San Antonio said: “Juno is all about pushing the edge of technology to help us learn about our origins. We use every known technique to see through Jupiter’s clouds and reveal the secrets Jupiter holds of our solar system’s early history. It just seems right that the sun is helping us learn about the origin of Jupiter and the other planets that orbit it.”

A specialised fuel to power NASA’s future deep space missions has been produced. Earlier this month NASA revealed new green technologies which it believes could help aircrafts save billions of dollars.