The functional integration of cogeneration and bio-cogeneration created by AB for INALCA’s food processing plants is a good example of energy efficiency applied to the meat industry. Inalca, the leading […] 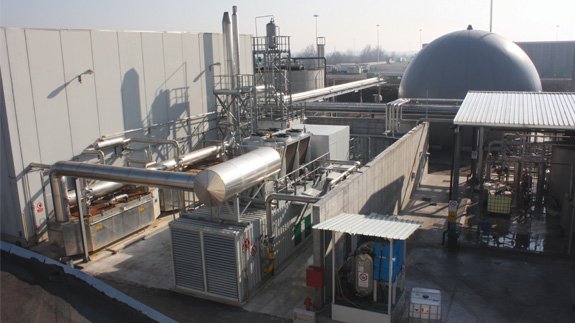 The functional integration of cogeneration and bio-cogeneration created by AB for INALCA’s food processing plants is a good example of energy efficiency applied to the meat industry.

Inalca, the leading Italian company in the production of beef and processed meat, inaugurated a new biogas plant at its Ospedaletto Lodigiano (LO) factory in November 2010, for the production of renewable energy mainly from slaughter biomass and by-products.

The Ospedaletto Lodigiano factory was inaugurated in 1999 and covers a total surface area of 400,000 sqm, of which 60,000 sqm are roofed; it has a total slaughter capacity of 350,000 head per year. This industrial complex, the largest and most modern European plant for the slaughtering and processing of beef, is an energy intensive structure that requires simultaneously electricity, heat, and hot water for its production processes. This is why cogeneration is an excellent opportunity for improving energy performance and savings.

Ecomax® 10 BIO, the new cogeneration plant made for Inalca’s Ospedaletto Lodigiano processing plant, is an addition to the natural gas fueled plant previously installed by AB at the power plant, constituting an interesting example of functional integration of cogeneration and bio-cogeneration in the food industry.

The Ecomax® 10 BIO plant uses the biogas produced through anaerobic co-digestion of sewage sludge for the operation of the cogeneration group. The electricity produced, in the form of heat, is entirely used for the production of hot water within the plant and for the drying phase of the digestate. Through this process, Inalca was able to drastically reduce disposal materials, thanks to their reemployment and the production of electricity from a completely renewable source.

Currently, the annual energy requirements of Inalca’s factories is 77 GWh. Thanks to the installation of the four high efficiency cogeneration plants made by AB at its sites in Busseto, Ospedaletto Lodigiano and Rieti (producing 12.7 MW of total power), today 48% of the energy requirements is entirely self-produced, with an 18% saving on TOE (tonnes of oil equivalent) per year and a reduction of CO2 emissions equivalent to 16,000 tonnes per year not released into the atmosphere.

As for the cogeneration plant fueled by natural gas, AB designed a system that interfaces with the existing one for water production and storage, achieving a perfect balance between the company’s hot water discontinuity needs and the operation of the cogeneration system, which by definition works continuously. Through the maximization of heat recovery during the management of the production cycle, it became possible to limit the use of steam generators existing only to cover thermal load peaks. On the advice of AB engineers, Inalca installed high performance engines (Miller cycle) reaching 43.9% electrical efficiency (versus 41% for standard engines).

The Inalca project achieved its target to drastically reduce disposal materials, through the implementation of a virtuous process leading to the re-use of such materials and the simultaneous production of electricity from an entirely renewable source.

THE SPECS ON THE NEW PLANT

Tonnes of CO2/year not released into the atmosphere 3,000