The world’s most climate-vulnerable nations are to pioneer innovation in green finance. That’s according to a new announcement from the Vulnerable Twenty (V20) group, which says it aims to help ensure continued […] 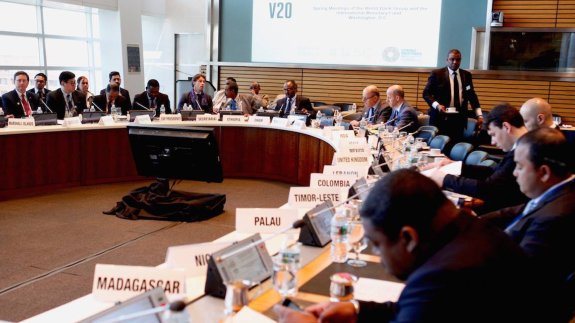 The world’s most climate-vulnerable nations are to pioneer innovation in green finance.

That’s according to a new announcement from the Vulnerable Twenty (V20) group, which says it aims to help ensure continued economic development while tackling the costly economic impacts of climate change.

It adds it will focus on low-emission development, shifts in financial flows towards achieving 100% renewable energy and stronger risk financing and insurance for vulnerable economies.

The V20 nations also urges G20 countries to deliver long term low emissions development strategies before 2020 and to include ambitious climate action in the outcomes for the G20 Summit in July.

In addition, the group warns against pulling resources from the Paris Agreement, which it said would create economic instability.

The V20 nations have officially confirmed the membership of Colombia, Lebanon, The Gambia, Palestine and Samoa.

H.E. Abraham Tekeste, Minister of Finance and Economic Cooperation of Ethiopia, said: “Today, the V20 achieved a number of important milestones with our strategic dialogue with the G20, as well as by initiating concrete initiatives to help V20 members finance climate action in their respective countries.”