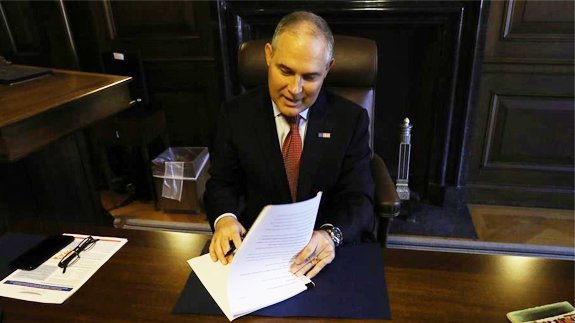 The US Government is proposing to repeal the Barack Obama-era Clean Power Plan (CPP) aimed at curbing greenhouse gas emissions from power plants.

The CPP requires states to meet specific emission reduction standards based on their individual energy use. It was designed to cut carbon emissions by 32% by 2030 and aimed to boost the use of renewable energy and efficient technologies.

The EPA, however, believes the CPP was “premised on a novel and expansive view of Agency authority that the Trump administration now proposes to determine is inconsistent with the Clean Air Act”.

It said the proposed repeal could provide up to $33 billion (£25bn) in avoided compliance costs in 2030.

Mr Pruitt added: “The Obama administration pushed the bounds of their authority so far with the CPP that the Supreme Court issues a historic stay of the rule, preventing its devastating effects to be imposed on the American people while the rule is being challenged in court.

“We are committed to righting the wrongs of the Obama administration by cleaning the regulatory slate.”

The EPA has yet to determine whether it will create an additional rule on the regulation of greenhouse gases.