They were launched at 4.27am from Sriharikota in India today by the Indian Space Research Organisation 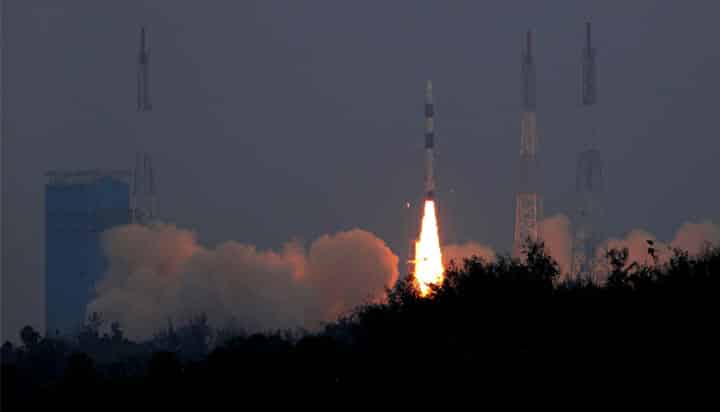 Two Scottish-built “first of a kind” satellites that will be used to monitor the weather and help combat global climate change were launched into orbit this morning.

Developed by Spire Global, they weigh 5kg each and are “pint-sized” and therefore low cost and quick to build.

They were launched at 4.27am from Sriharikota in India by the Indian Space Research Organisation (ISRO) but future spacecrafts are expected to be launched from the proposed spaceport in Sutherland in Scotland from the 2020s.

They were built under the European Space Agency’s (ESA) ARTES Pioneer programme, which aim to prove the value of “nanosats” in weather monitoring, by using them to measure radio signals passing through the Earth’s atmosphere.

Experts can use the satellite’s measurements to gather information on temperature, pressure and humidity for weather forecasting as well as climate change monitoring.

Graham Turnock, Chief Executive of the UK Space Agency said: “These incredibly clever pint-sized satellites built in Glasgow could slash the complexity and cost of access to space, presenting an exciting opportunity for the UK to thrive in the commercial space age.

“Through our £4 million development funding in ESA’s ARTES programme, the government’s Industrial Strategy and by working closely with our international partners, we are helping Scottish businesses transform their ideas into commercial realities, resulting in jobs, growth and innovation.”

The UK Space Agency is also supporting a space incubation centre in Glasgow and has provided support over several years to the Scottish Centre of Excellence in Satellite Applications, which is based at the University of Strathclyde.

The Centre’s role is to raise awareness of the potential of satellite services and data to be used in new and improved products and services in other “space-enabled” markets, including, offshore renewable energy.